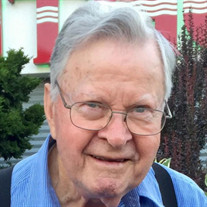 Preble Carlton Poland passed away March 25, 2020 at Mt. Baker Care Center at the age of 90. He was born July 2, 1929 to John W. and Estelle (Lewis) Poland in Rocky Mount, NC. Preble graduated from Benvenue High School in Rocky Mount. In 1950 Preble enlisted in the Navy and served four years. He spent much of his service as damage controlman on the destroyer USS Daly with a brief stint in the Korean harbor just before the war ended. Aboard the USS Daly he circumnavigated the globe. After his honorable discharge in 1954, Preble attended NC State University and then was employed as an aerial mapping photographer. While mapping the southwestern corner of North Dakota in 1957 he met the love of his life, Eva Wolf, in Mott, ND. Preble and Eva married in June 1958. Aerial mapping required traveling so in the next few years they lived in Montana, New Mexico, North Carolina, North Dakota and New Jersey. In 1964 Preble and Eva decided to make their home in Mott, ND where Preble was the owner of Preb's Enco service station and garage. He was active in Knights of Columbus, Jaycees and was a volunteer fireman. With the Jaycees Preble dedicated much of his time doing service projects in Mott, earning him the honor of Outstanding Jaycee of the year. In 1966 Preble and Eva with three daughters moved to the Seattle area where Preble was employed with Boeing in Renton, WA. The family moved and lived in Renton for 47 years and had another daughter. In 1973 Preble started his own remodeling/building company. He owned and operated Poland's Construction until his retirement. After retiring one could find Preble in his workshop where he created many beautiful things including two large rocking horses, ornate scroll saw clocks and personalized wooden boxes or tending to over 30 rose bushes. Preble loved nature and passed that love and appreciation on to his daughters. He had knowledge of many animals and birds and could easily tell the type of bird by its song. All of his daughters rave about their ability to fix practical items around their homes and beyond due to his dedication to teaching them to be self-sufficient. Preble and Eva moved to Bellingham, WA in 2013 to be closer to family. He has resided at Mt. Baker Care Center since April, 2018 because of his Lewy Body Dementia with Parkinsonism. He was a contemplative and quiet man with occasional moments of lively, dramatic story telling. We will miss his quick wit and as a caregiver at Mt. Baker stated "his one liners". Preble is survived by his wife of 62 years, Eva Wolf Poland, daughters Julia Poland, Cynthia (Troy) Bach of Bellingham, WA; Cheryl Lodge, Boise, ID and Joan Marie Poland, Olympia, WA; grandchildren Derrick Lodge, Audrey Lodge, Carlton Bach and Ella Bach; sister Sylvia Turner, Fort Washington, MD; sister-in-law Dianne (Dale) Pohle, Great Falls, MT and many nieces and nephews. Preceding Preble in death are his parents, sisters Marjorie and Francis, brother Herbert, and nephews Lockwood, Bradley and Sherwood. The family appreciates and is thankful for the caring and loving caregivers, nurses, doctors and staff at Mt. Baker Care Center. Mass of Christian Burial will be held on Thursday, August 12th at 11am at Sacred Heart Catholic Church. A reception will follow.

The family of Preble Carlton Poland created this Life Tributes page to make it easy to share your memories.