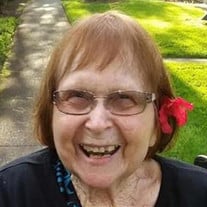 Phyllis Eloise (Tweit) Rall, age 89, passed away in Bellingham, WA on January 7th, 2019, just over two weeks after her brother Gordy passed away. She was born the youngest of three, born January 26, 1929 to Norman and Alice Tweit in Bellingham. She loved music and was the lead in several operettas during high school. She attended the University of Washington, studied music at the Peabody Institute in Baltimore, and later graduated with a degree in education from Western Washington University. While living in Baltimore she met James Rall with whom she fell in love and married on October 13, 1951. They had two daughters together, Mary Jo and Cindy, and Jim had a son, Richard, from a previous marriage. Besides singing in school and the church choir, Eloise sang at special events like weddings and funerals. She also sang with the Norwegian Men's Choir in 1969. Eloise was a well-loved elementary school teacher in Bellingham for many years. Eloise loved to read and listen to classical music and operas. She was very interested in learning about God, and studied many different religions. Eloise was a faithful member of Our Saviour's Lutheran Church. Getting together with friends and family were special treats to her. Eloise is survived by her daughters Mary Jo (Clark) Wilkins and Cindy Rall, daughter-in-law Doris Rall, grandchildren Travis (Lucy), Britt and Addison (Dawn) Wilkins, Linda (Tom) Groom, Bev (Brian) Rogers, Rick (Tara) Rall and Joshua (Pam) Rall, 15 great-grandchildren and one great-great-granddaughter. She was preceded in death by her husband James Rall, stepson Richard Rall, sister Norma Sea and brother Gordon Tweit. A Celebration of Eloise's Life will be held at Our Saviour's Lutheran Church at 11:30 am on Saturday, January 26th. A reception will follow at the church. Rev. Joel Langholz will be officiating. Memorials may be made to Our Saviour's Lutheran Church or Whatcom Hospice House.

Phyllis Eloise (Tweit) Rall, age 89, passed away in Bellingham, WA on January 7th, 2019, just over two weeks after her brother Gordy passed away. She was born the youngest of three, born January 26, 1929 to Norman and Alice Tweit in Bellingham.... View Obituary & Service Information

The family of Phyllis Eloise (Tweit) Rall created this Life Tributes page to make it easy to share your memories.