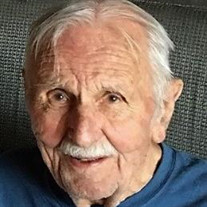 Loving and beloved, Philippe Rene Claringbould, age 98, died peacefully on February 10, 2017 at the Hospice House in Bellingham, Washington. Rene was the fourth of five boys born to John and Saar Claringbould in The Hague, Netherlands. Rene was born on January 15, 1919. By age 18, he loved sailing, flying, and studied aeronautical engineering. But on May 10, 1940 he was awakened by planes overhead and within days, the Germans occupied Holland. During the occupation, Rene was arrested and interrogated several times but his student status, false papers, peaceful demeanor, and skill with foreign languages probably saved his life. He has harrowing stories of the war. After the war, Rene worked for the precursor to KLM Airlines as an Airport Operations Manager. He was stationed in Iraq, Singapore, Holland and then Uruguay. He especially enjoyed living in Uruguay, where he loved the climate, lifestyle, people, and did “the most creative and technically challenging job I ever did”, assembling a working cane-sugar plant from just a stack of drawings. But two of his brothers had immigrated to the US after the war and were urging him to move near to them in the Seattle area. Eventually he applied for a US Green Card and, in 1957, arrived in Seattle. Rene helped his brother John get established in Lynnwood. Then in the early 1960s, Rene moved to an apartment on Lake Washington and got a job with Boeing. Rene had a happy life in Seattle--sailing, skiing, and frequently visiting Holland and his brothers’ families. He became a US citizen with great pride on July 4, 1976. In 1979, friends introduced him to their attractive Madison Park neighbor, Rosa Lowrey Law. At age 62 in 1981, Rene finally married. He and Rosa enjoyed life together for almost 30 years. During those years, he volunteered as an interpreter, attended University Unitarian Church and St. Mark’s Episcopal, and continued his hobbies of sailing, flying gliders, and swimming. Rosa passed in 2012 and Rene moved to Park Shore. From that retirement home, he continued his active life: swimming in Lake Washington (into his 90’s!) and participating in events and activities in the community. In 2014, Rene moved to Bellingham to be closer to family. He decided to move to an apartment in a new senior living facility in 2016. Rene lived an active life there until November 2016. After a fall and hospitalization, he passed peacefully with courage and humility. Rene is preceded in death by his four brothers John, Frits, Maarten, and Frank Claringbould and his wife Rosa. He is survived by three sisters-in-law: Anna, Hankie, and Martien, and the children, grandchildren, and great-grandchildren of his four brothers. Nieces Sarah Bellin, Mary Ross, Kathy Furtado, and Julie Clarke, and special friend Nadeen Clarke will host a service 2 PM on Sat, Mar 4 at Affinity: 3930 Affinity Lane, Bellingham WA 98226, as well as a memorial service at 2 PM on Sat, Mar 25 at Park Shore: 1630 43rd Ave E, Seattle WA 98112.

Loving and beloved, Philippe Rene Claringbould, age 98, died peacefully on February 10, 2017 at the Hospice House in Bellingham, Washington. Rene was the fourth of five boys born to John and Saar Claringbould in The Hague, Netherlands. Rene... View Obituary & Service Information

The family of Philippe Rene Claringbould created this Life Tributes page to make it easy to share your memories.