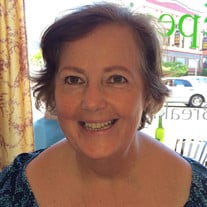 Penny Ann (Wells) Andaluz passed away in her sleep Saturday January 26th, 2019, after a long battle with cancer. Penny was born June 17, 1958 to Lamar Kenneth Wells and Marie Francis McAvoy. She was preceded in death by her parents and by brothers Steven Allen Wells and Donald Addison Wells. Penny attended B.F. Day Elementary School in Seattle, then Crystal Springs Elementary upon her mother's remarriage to Caron F. Holman, when they moved to his gentleman's farm in Woodinville, WA. Penny graduated with honors from Bothell High School in 1976. She attended Western Washington University, and participated in an exchange study to Mexico, where she met her future husband, Gerardo Andaluz. Penny graduated from the University of Washington with honors in 1980, with a major in Spanish. She dedicated the next 30 years to raising 3 beloved children: son Gabriel and daughters Sara and Catalina. Divorced in 1997, the light of Penny's life became her 9 grandchildren. Penny has been very blessed by her 4 remaining siblings: Lamar Kenneth Wells, Jr., Cherry Marie Thomasen Riley, David Charles Wells, and Misty Dee Cline. Penny is proud of raising strong and loving children, and thankful to have passed on her lifelong faith to them. She was baptized in Lake Whatcom and attended Bellingham First Baptist Church for almost 20 years. Penny wrote her own obituary. She described her children as "my fabulous son Gabriel, who was like a rock to me after my divorce; my precious daughter Sara, my tender curly-haired wonder; and my spitfire daughter Catalina, my tender wavy-haired wonder." Penny's children notice that those same words also describe Penny: fabulous, tender, spitfire. One of Penny's most defining qualities was her incredibly big heart, loving others without judgment or condition. Many count her as a second mom because of the love and support she showed to so many kids over the years. Penny said, "I attribute my mothering to my matriarch Marie, who gave me true grit. Special thanks to my stepdad Caron Holman who took us all in and gave us years of fun, learning, and bounty at his farm. I am thankful above all to God, who gave me every bit of courage." A Celebration of Life will be held in April, at a date to be announced. In lieu of flowers, please make donations to Whatcom Hospice Foundation, who made it possible to fulfill Penny's wish of dying at home, and helped make the last month of her life so full of peace and comfort. 2901 Squalicum Parkway Bellingham, WA 98225, www.whatcomhospice.org. You may share memories with the family at www.westfordfuneralhome.com

Penny Ann (Wells) Andaluz passed away in her sleep Saturday January 26th, 2019, after a long battle with cancer. Penny was born June 17, 1958 to Lamar Kenneth Wells and Marie Francis McAvoy. She was preceded in death by her parents and by brothers... View Obituary & Service Information

The family of Penny Ann Andaluz created this Life Tributes page to make it easy to share your memories.