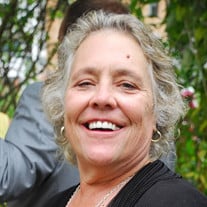 The sky gained a new shining star, a "true original" when Penelope F. Cofrin peacefully made her exit in her sleep on October 7, 2015. She was born in Green Bay, WI on June 14, 1953, Flag Day, and was the youngest of six children of John and Barbara Cofrin. Though she was the youngest she demanded control, famously scoffing "huh, I am!" when her oldest brother told her he was in charge. She grew up frequenting the YMCA, and was involved with the swim team and tennis. "Ball Peen Hammer" remained a top notch ping pong player for her whole life. She was a Cheesehead from the beginning, and loved cooking for her family and friends who gathered to watch the Packers and Duke Blue Devils. Penny's roots in Green Bay will be remembered through the Cofrin Childrens' contribution to the University of Green Bay-Wisconsin in creating the arboretum that surrounds the campus. Pen left Green Bay for Emma Willard high school in New York. After graduation she attended Reed College and came to Montana "for a weekend and never left." She made lifelong friends, including both of her husbands. She met Larry Little in Havre, playing bridge. He had to "have her" was their joke. Together they had Robyn Paige and Barbara Maureen less than one year apart. She met her second husband Rick Korf years later. From this marriage came Sarah K. Savannah. Penny's girls were her pride and joy. Her green eyes would sparkle when she watched them play their sports. That pride and love was only intensified when she became a grandmother. Patience, Jayden, LaNayah, Aubrey and Logan will miss their Nana. She had a boisterous nature, contagious laugh and purple hair. Her fashion sense was as unique as her sense of humor. She was known to wear bright mumus, converse sneakers, sunglasses, and of course her teams' clothes to any event. Her keen eye also translated to her love of interior design and art. There are thousands of stories from the lives she's touched detailing her adventurous spirit and generosity. She would often help others without needing recognition, anonymously making donations to organizations and individuals including (but not limited to): Darby Elementary, the University of Montana and the Missoula and Green Bay YMCAs. Some of her proudest accomplishments were: becoming a life master at bridge at age 17, haying for the Geary Brothers in Helmville, MT, producing and starring in four sing along videos for kids with the help of her brother John, and graduating with honors as a "non-traditional student" at Smith College where she was chosen as an Ada Comstock Scholar. Her love for music was obvious. She loved concerts, manning the juke box, and dancing; even if she was the only person on the dance floor. She played the bass, the spoons, and the world's smallest violin for anyone who would listen. She even played percussion on two albums for two different film scores. Penny was preceded in death by both of her parents, and her brothers Douglas and Peter. She is survived by her brothers John and Andrew, sister Tish, daughters Robyn Patric (Ian), Barbara Fossen (Kurt), and Sarah Cofrin, grandchildren Patience Cofrin, Jayden Jackson, LaNayah Cofrin, Aubrey Fossen, and Logan Fossen. She is also survived by a large network of friends and extended family. P always joked about how she came to Montana for a weekend and never left. She may have found a new home but we know she has still not left us. There will be a ceremony at Westford Funeral Home in Bellingham, WA on Tuesday October 13, 2015 at 2:00 and a potluck reception at Medicine Hot Springs in Conner MT on Saturday October 17th at 2:00. Friends and family are welcome. In lieu of flowers please send donations in her honor to your local YMCA.

The sky gained a new shining star, a "true original" when Penelope F. Cofrin peacefully made her exit in her sleep on October 7, 2015. She was born in Green Bay, WI on June 14, 1953, Flag Day, and was the youngest of six children of John and... View Obituary & Service Information

The family of Penelope F. Cofrin created this Life Tributes page to make it easy to share your memories.

The sky gained a new shining star, a &quot;true original&quot; when Penelope...