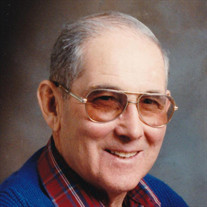 Paul L. Knowles, the beloved patriarch of the Knowles family was received into his Heavenly Father’s arms the evening of Wednesday, November 11, 2020. Paul was born in Algona, WA, on February 18, 1916, to Lloyd and Lydia (Evans) Knowles. He was one of five brothers who have predeceased him. Paul graduated from Auburn High School where he played football. He also volunteered with the Auburn Fire Department. After graduation, a job brought him to Seattle where he met a cute little Swedish Finn girl, Irene Carlson. They were married and settled in Auburn where Paul worked with his dad learning the trade of carpentry. Two children were added to the family, Dick and Diane. In 1953, Paul made a big decision to pack up his family and move to Anacortes where he had bought a working share in Anacortes Plywood. Paul worked in the “Green End” where the logs were received. The family lived in a little cabin on Gibralter Beach. They soon found their dream location...a 50 foot lot on Dewey Beach. After working a full shift at the mill, Paul would work building their dream home from the basement up. Paul was truly a man of all trades. This home was always full of joy and laughter, overnight company, family dinners and crab feeds. Paul’s signature dish was barbequed salmon. After Irene’s passing, Paul traveled extensively. He went through the Panama Canal and took train trips across the US and Canada. But his favorite thing to do was jumping on the Alaska ferry in Bellingham and riding up and back. He did this twice. He said he liked being around young people. Recently Paul had been living in Bellingham to be close to family. Paul was an active member of Anacortes Lutheran Church where he has many dear friends who adopted him. He was known as “Neighbor Paul” at the Dewey Beach Community, especially by his dear friend Norrie Hanson. Paul was predeceased by his son, Dick Knowles and wife Irene. He is survived by his daughter, Diane (Stan) Nelson and grandchildren Laeth (Kara) Nelson, Matthew (Angel) Nelson and Kayla (Zach) Solis. His beloved great-grandchildren are Gunnar, Jenaka, Bode, Baylor, Oliver, Jacob and Dylan. The family wishes to thank the caregivers at Brookdale Fairhaven for their compassionate and loving care. We also want to thank Whatcom Hospice for their faithful care. A private family remembrance will be held at a later date. Well done good and faithful servant. We will miss you. You may share memories with the family at www.westfordfuneralhome.com.

Paul L. Knowles, the beloved patriarch of the Knowles family was received into his Heavenly Father&#8217;s arms the evening of Wednesday, November 11, 2020. Paul was born in Algona, WA, on February 18, 1916, to Lloyd and Lydia (Evans) Knowles.... View Obituary & Service Information

The family of Paul L. Knowles created this Life Tributes page to make it easy to share your memories.

Paul L. Knowles, the beloved patriarch of the Knowles family...