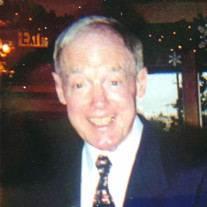 Pat McEvoy, age 92, of Bellingham, WA passed away Thursday, February 27, 2020 in Bellingham. Pat was born on June 21, 1927 in Seattle, WA to Charles and Alice McEvoy. His grade school years were spent at Assumption School in Bellingham. He graduated from Bellingham High School in 1945 and served in the U.S. Navy during WWII. After basic training in San Diego he served most of his time in the Navy in the Philippines where he was deployed on a mine sweeper ship. After his return from the war he spent a year at Western Washington State College in Bellingham and transferred to the University of Washington in 1949, graduating in 1952 with a degree in Business Administration. Pat really enjoyed his time as a member of Sigma Nu Fraternity at the University of Washington. At the University of Washington he met the love of his life, Virginia “Ginny” Reid. They were later married on September 8, 1951 and together they raised five children in Bellingham. Pat owned McEvoy Oil for 35 years, retiring in 1999. Pat was a patriarch in the best sense of the word. He loved his children, grandchildren and great-grandchildren. He took time to regularly check in with each one of them and provided them with advice and support. Pat was affectionately known as the “trail boss” as he took his daily walk on the trails in the Barkley neighborhood. He enjoyed connecting with others who walked the trail regularly. He was always prepared to share a joke with those he chatted with. Pat had great compassion for those who were facing big challenges in life and needed some assistance. As a 40 year volunteer at St. Vincent de Paul, Pat responded to requests for those that had needs of some of the basic necessities of life. Pat was a member of Sacred Heart Catholic Church and Assumption Church for most of his life. He also was a Charter Member of Kulshan Kiwanis, where he established the “Girl of the Month” program in 1963. In 2008 Pat McEvoy received the Paul Harris Fellowship award for his community service. Pat was preceded in death by his parents, Charles and Alice, his wife Virginia, his brother Chuck and his great-granddaughter Mira. Pat is survived by his children Kathy Newport, Tim (Marcia) McEvoy, Mike (Sarah) McEvoy, Dave (Samantha) McEvoy and Ann McEvoy, 12 grandchildren, 8 great-grandchildren, and many loving relatives and friends. Mass of Christian Burial will be held at 11:00 a.m. on Tuesday, March 3rd at Sacred Heart Catholic Church in Bellingham. Reception following at the church hall. The family would like to thank Visiting Angels and Hospice for the great care they gave him during the last few months of his life. Memorial donations may be made to St. Vincent de Paul, 1110 14th St., Bellingham, WA 98225. You may share your memories of Pat at www.westfordfuneralhome.com.

Pat McEvoy, age 92, of Bellingham, WA passed away Thursday, February 27, 2020 in Bellingham. Pat was born on June 21, 1927 in Seattle, WA to Charles and Alice McEvoy. His grade school years were spent at Assumption School in Bellingham. He... View Obituary & Service Information

The family of Patrick C. "Pat" McEvoy created this Life Tributes page to make it easy to share your memories.