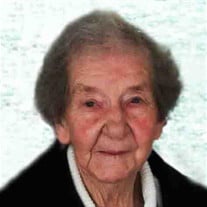 Patricia J. “Pat” Hjort, age 93, passed away peacefully on Wednesday, October 4, 2017. She was born on February 26, 1924 to William and Mae Booher in Wallace, Idaho. Pat was just three years old when Mae passed away, but she was blessed to be cared for by another dear woman when her father William married his longtime friend, Vera. Pat married Herman Hjort in Seattle on April 30, 1945. After over 35 years there, they enjoyed their early years of retirement in Marysville and eventually settled in Lynden. Pat was a dedicated mother, homemaker, and church member. She was very active at St. Paul’s Lutheran Church in Seattle where she helped orient new clergy, was on the church council, and helped many brides prepare for and walk down the aisle. To help ease the loss of her husband in 2007, Pat joined the congregation at Hope Lutheran Church in Lynden where she could be active once again and made many friends. Among her many hobbies, Pat learned to create bunka embroidery and even traveled with a bunka group to Japan and China. For many years, dahlias and roses outlined her home. She enjoyed knitting and was an avid reader. Even after losing her eyesight, she discovered she could enjoy them both by listening to audiobooks while knitting from memory prayer shawls, scarves, hats, and baby blankets for those in need. Pat was predeceased by her husband Herman, step-brother Seaton Daly of Spokane, and her son William “Mike” who moved from Memphis to Lynden in 2009 to help take care of her and her home until his sudden passing last year. She is survived by her daughter Kristine Heintz (husband Mike) of Bellingham, WA; grandchildren Jennifer Weaks (husband Kevin) of Memphis, TN and Robin Forrester (husband Jay) of Nashville, TN; three great-grandchildren, Hayden, Connor and Jack, and many loving relatives and friends. Pat had a positive impact on so many lives. She will be greatly missed by all who knew and loved her. You may share memories with the family at www.westfordfuneralhome.com.

The family of Patricia Jean Hjort created this Life Tributes page to make it easy to share your memories.