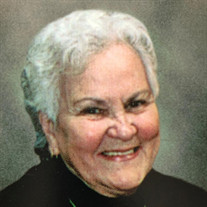 Olivia P. Hopper passed away peacefully in Bellingham, WA on January 3, 2022 with family by her side. The youngest of thirteen children, she was born into a first-generation Portuguese family on November 22, 1924 in Tulare, CA to Frank and Pauline Borges. After graduating from high school, she became a military spouse and lived in several naval base locations, eventually settling in Fresno, CA. She worked as a supervisor at American Safety Equipment Corporation and after retirement found a new position as “Nana” for several families. In addition to her work outside the home, she was a devoted mother and grandmother who enjoyed cooking, baking and keeping a spotless house. Even during her time as a single parent, she received an award from the Boy Scouts of America for being the most active supporter of her sons. Olivia married Robert “Bob” Hopper in 1980 and moved to Bellingham in 1997, where they joined Trinity Lutheran Church and volunteered in many church activities. Because of her outgoing, vivacious and welcoming nature, Olivia developed lifelong friendships wherever she went. She was one of a kind and will be deeply missed. Olivia was preceded in death by her parents, husband Bob Hopper, son Robert Murphy and son-in-law Ray Downey. She is survived by three children, Diana Murphy, Larry (Veronica) Roebuck and Richard (Janet) Roebuck, grandchildren Jennifer (Emmanuel) Gabet, Blue Murphy, Jessica (Francisco) Rodriguez, Stephanie (Jordan) Cook and Anna (Robert) Gillespie, and great-grandchildren Xavier, Gus, Luci, Canaan, Zane and Macrae. She is also survived by Bob’s four children, Brenda (Martin) Dedekian, Robert (Lorrie) Hopper Jr., Gary (Jeanette) Hopper and Matthew (Kim) Hopper, and their children and grandchildren. Olivia’s family would like to thank Summit Place Assisted Living for the compassionate care she received from the entire staff. Olivia's final resting place will be at Woodlawn Cemetery, Ferndale. A memorial service will be held at Trinity Lutheran Church in Bellingham on Friday, March 25th at 2 PM. Pastor David Wagner will be officiating. You may share memories with the family at www.westfordfuneralhome.com.

Olivia P. Hopper passed away peacefully in Bellingham, WA on January 3, 2022 with family by her side. The youngest of thirteen children, she was born into a first-generation Portuguese family on November 22, 1924 in Tulare, CA to Frank and Pauline... View Obituary & Service Information

The family of Olivia P. Hopper created this Life Tributes page to make it easy to share your memories.

Olivia P. Hopper passed away peacefully in Bellingham, WA on...