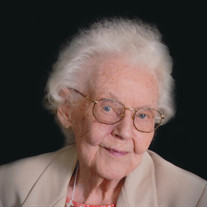 Norma Marrs, age 98, passed away peacefully, following a stroke and surrounded by family, at Hospice House in Bellingham on Thursday, January 12, 2017. She was born February 22, 1918 in Aberdeen, WA to Harper and Anna Coons. She married H. Wayne Marrs on December 18, 1938. Norma attended Grays Harbor College and later in life attended Seminary of the Southwest in Austin, TX. Norma was involved in Christian education with several Episcopal Parishes in Utah, Louisiana, Texas and Washington and with the National Episcopal Church where she provided leadership for church school curricula development. She was actively involved for many years as a staff member or volunteer with Christian Education and several guilds at St. Paul’s Episcopal Church in Bellingham. She also served with St. Andrews Episcopal Church in Aberdeen, WA. Norma was passionate about serving others any way she could; she was a long-time member of P.E.O.; was an accomplished water color artist, and a gourmet cook. She was preceded in death by her husband the Rev. H. Wayne Marrs and grandson Jon Marrs. She is survived by her sons Larry (wife Billie) Marrs of Bellingham and Jim (wife Jeanne) Marrs of Price, Utah; grandchildren Mike, Kim, Kelly, Jerry and Jeff, and step-grandchildren James, Kelly and Michael; sister Betty and niece Vicki; and many other loving relatives and friends. A Burial Eucharist will be held at St. Paul’s Episcopal Church on Thursday, January 26th at 10 AM. Reception following. Memorial donations may be made to St. Paul’s Episcopal Church Alms Ministry at 2117 Walnut St, Bellingham, WA, 98225 or to Whatcom Hospice at 2806 Douglas Ave, Bellingham, WA 98225. You may share memories with the family at www.westfordfuneralhome.com.

Norma Marrs, age 98, passed away peacefully, following a stroke and surrounded by family, at Hospice House in Bellingham on Thursday, January 12, 2017. She was born February 22, 1918 in Aberdeen, WA to Harper and Anna Coons. She married H.... View Obituary & Service Information

The family of Norma C. Marrs created this Life Tributes page to make it easy to share your memories.