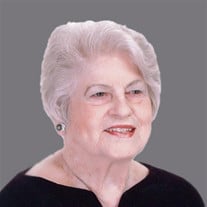 Naida J. Deitsch died on August 13, 2015. She was born in Centralia, WA to Clinton E. and Daisy M. Marley. Her father was a teacher and they moved several times while she was growing up. Her parents moved to Anacortes in 1936 where she spent her school years and graduated from Anacortes High School in 1945. Later that year, she married Walter D. MacDonald. Walter died in 1948. While attending Western Washington University from 1949 to 1951 Naida was Assistant House Mother at Edens Hall. She left as a senior to marry Pete Deitsch in 1951 and they achieved a close partnership in all aspects of their marriage. After retiring, Naida became active in the Whatcom County GOP and served as Treasurer for eight years and Vice-Chairman for 1 ½ years. She was a PCO for the Puget neighborhood for many years and participated in many campaigns as a fund raiser. She enjoyed working with the public and made many new friends. She served on Senator Slade Gorton’s Advisory Committee for Whatcom County for two years. In 1990, along with four local businessmen, she helped co-found the Northwest Business Club. She served as Program Chairman and Secretary and has served as Treasurer since the beginning. Naida had many interests including politics, reading, playing bridge, cooking, needlepoint, gardening, collecting antiques, working jigsaw and crossword puzzles, creating Pysanka Easter eggs and traveling. She loved Siamese cats and raised four of them, the last one called Pia (pain in the ass). Naida was preceded in death by her husband of 59 years, Pete Deitsch (2010) and sister-in-law Carla Marley (2015). Surviving is her brother, Don C. Marley, nephews Clint Marley (Theresa), Steven Marley and Charles Marley (Lucy), niece Connie Exoo (Hank) and numerous grandnieces and nephews. A Happy Hour Celebration of Naida’s life will be held at the Squalicum Boathouse at Zuanich Point, 2600 Harbor Loop in Bellingham at 3 PM on Wednesday, August 26th. Memorial donations may be made to the Freedom Foundation, P.O. Box 552, Olympia, WA 98507.

Naida J. Deitsch died on August 13, 2015. She was born in Centralia, WA to Clinton E. and Daisy M. Marley. Her father was a teacher and they moved several times while she was growing up. Her parents moved to Anacortes in 1936 where she spent... View Obituary & Service Information

The family of Naida J. Deitsch created this Life Tributes page to make it easy to share your memories.