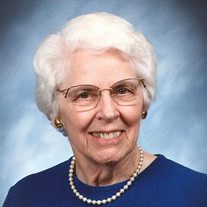 Anna Elizabeth (Finley) Godden, age 92 of Bellingham,WA went to be with the Lord on June 24, 2016. The third of six daughters, Anna was born December 5, 1923 to Frank and Mamie Tucker Finley on the family farm in Lincoln County, Missouri. Anna and her five sisters were blessed to have been raised in a home that loved and honored the Lord. After graduating from Asbury College, KY 1943, she enjoyed teaching school. She then earned a Master’s degree in Library Science from the University of Illinois in 1954. While working as a university librarian, Anna met her husband Bill in 1954 while he was teaching at the University of Illinois at Urbana on a year sabbatical leave from Queen’s University Belfast, N. Ireland. In 1957 Anna boarded the Queen Mary oceanliner and traveled across the Atlantic Ocean to marry William George Godden on August 26, 1957 in Guildford, England. They lived in Bangor N. Ireland until they moved to Berkeley, CA in 1964, and then to Bellingham, WA in 2009. Anna was a loving and devoted wife, mother and grandmother, and valued life-long friendships. She believed that one of the greatest gifts of life is the blessing of strong ties with family and friends, combined with faith. She enjoyed years of hosting family meals and gatherings, volunteering with other UC Berkeley faculty wives for student events, and volunteering at First Presbyterian Church of Berkeley where she was a faithful member for 45 years. Anna is survived by her son John (Catherine) Godden, daughter Kay (David) Hageman, grandchildren Thomas Godden, Emma Hageman, Sarah Hageman, Matt (Julie) Hageman and their daughter Daphne, Josh (Erica) Hageman and their daughters Hailey and Lauren. She is further survived by her youngest sister Frances (Charles) Pinkston. Anna was preceded in death by her loving husband of 54 years Bill Godden, her older sisters Annetta Finley and Nadine Baber, and her younger sisters Dorothy Hubble and Ruby Edwards. She always treasured her family members, including her brothers-in-law and sisters-in-law, many nieces and nephews, grandnieces and grandnephews on both sides of the Atlantic Ocean. Anna’s family gratefully acknowledges the care she received from her many loving caregivers over the past few years from Visiting Angels, Silverado, The Bellingham at Orchard, Garden House at Brookdale Bellingham, and Whatcom Hospice House. A Funeral service and interment will be held at Auburn Presbyterian Church in Silex, Missouri at 11 AM on Saturday, July 2, 2016. Memorials may be made to the American Bible Society at www.americanbible.org, World Vision at www.worldvision.org.

Anna Elizabeth (Finley) Godden, age 92 of Bellingham,WA went to be with the Lord on June 24, 2016. The third of six daughters, Anna was born December 5, 1923 to Frank and Mamie Tucker Finley on the family farm in Lincoln County, Missouri.... View Obituary & Service Information

The family of Mrs. Anna E. Godden created this Life Tributes page to make it easy to share your memories.