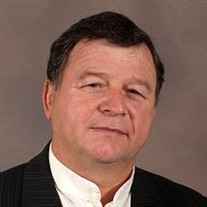 Mikhail N. Shkurat, age 63, went to be with his Lord and Savior, whom he loved so much on March 3, 2015 at 6pm. He is survived by his wife Lyudmila, daughter Nadia and her husband Roman, son Alex and wife Nadia, daughter Natalya and her husband Mark, and nine dearly loved grandchildren. Mikhail was born in November, 1951 in village Olesha, Ukraine. In his early years, Mikhail took on the responsibilities of a grown man, doing most of the work around the house since his father became disabled at an early age. In November of 1980, Mikhail married an amazing woman, Lyudmila, with whom he spent almost 35 years of his life. God blessed them with three children and nine wonderful grandchildren. When Mikhail was still young he decided to follow Christ, and that was his goal until his last breath on this earth. Whether at home, at work or in church, Mikhail’s mission was to please his Lord and to fulfill the will of God in his life. The standard by which Mikhail lived was always the Word of God. His true happiness was in the close relationship with his Savior Jesus Christ, and in the fellowship with God’s church. God gave Mikhail a very kind and loving heart, which he shared with the people around him, especially his family. Love was always the wrapping around his suggestions, ideas and even rebuke. He had full confidence that he was in God's hands and that everything that God allowed to come into his life was the best, because it came from his loving Heavenly Father. Even during his time of sickness he trusted that his Lord had everything under control. When he found out of his terminal diagnosis, one of the first things he said was, “I can't say to my Lord that He has done something wrong." He accepted the will of God for his life and encouraged his family to do the same. He became an example of true faith and complete trust in the ways of the Lord. “Remember those who led you, who spoke the work of God to you; and considering the result of their conduct, imitate their faith." Hebrews 13:7. Funeral services were held in Bellingham, WA. Committal took place at Enterprise Cemetery, Ferndale, WA.

Mikhail N. Shkurat, age 63, went to be with his Lord and Savior, whom he loved so much on March 3, 2015 at 6pm. He is survived by his wife Lyudmila, daughter Nadia and her husband Roman, son Alex and wife Nadia, daughter Natalya and her husband... View Obituary & Service Information

The family of Mikhail Shkurat created this Life Tributes page to make it easy to share your memories.