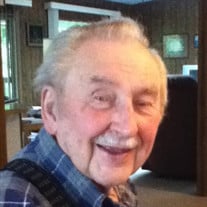 Mike Wispinski, age 87 of Bellingham, passed away peacefully on January 4, 2015. He was born at home on March 17, 1927 in Plain Lake, Alberta to Dmytro and Ahaphia Wispinski. He was one of twelve children, one died at birth. His father and grandfather emigrated from the Ukraine in the late 1800’s and early 1900’s and they settled on a farm by Plain Lake. After completing high school in Two Hills he worked in the mines in Kimberly, B.C. for a year so he would have money to continue his education. In 1950 he decided to join the United States Air Force for some adventure. He had orders to go to Korea but the orders were changed to go the U.K., and he was able to see much of Europe. After his discharge from the Air Force he earned a G.I. bill to continue his education so he chose to go the railroad school in Seattle where he took Office Administration which landed him a job at the Salmon Terminal in Seattle where he worked for 35 years. He also met his future step-son, David, at the Railroad school. David invited him over to his mother's house in Madison Park. She made him dinner and he was hooked. She offered to rent him a room, so he stayed and later they fell in love and married. They had many wonderful years together till she passed away in 2006. He lived in Madison Park for over 50 years and loved the neighborhood and made many wonderful friends there. After his wife passed away, he moved to Bellingham to live with his sister Lena. Later, he lived at Emeritus at Fairhaven where he passed away. Mike was preceded in death by his loving wife Florence, his parents, Dmytro and Ahaphia, his brothers, John and Steve, his sisters, Marie, Nancy, Tillie, Pearl, and Annie. He is survived by sisters Lena Ryan of Bellingham, Olga Gould and Josie Park both of Edmonton, Alberta, step-son David Bashaw of Bellevue, grandchildren Terry Bashaw of Everett, Teresa Corrales of Bothell, Carol Bashaw of Bellevue, Denise Walker (Tim) of Bend Oregon, great grandchildren Brett Bashaw (Natasha) of Seattle, Angela Sylvester (Ben) of Everett, Jeremy Walker of Bend, Oregon, Samuel Walker of Bend, Oregon, great great grandchild Amara Cheung of Shoreline, and many loving nieces and nephews. Memorials in Mike’s name may be made to Immaculate Conception Church in Seattle or the American Cancer Society. Mass of Christian Burial will be held at Immaculate Conception, 820 18th Ave in Seattle at 11 AM on Saturday, January 17th. Reception following at the church. Committal following at Calvary Cemetery.

Mike Wispinski, age 87 of Bellingham, passed away peacefully on January 4, 2015. He was born at home on March 17, 1927 in Plain Lake, Alberta to Dmytro and Ahaphia Wispinski. He was one of twelve children, one died at birth. His father and grandfather... View Obituary & Service Information

The family of Michael "Mike" Wispinski created this Life Tributes page to make it easy to share your memories.