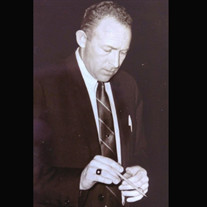 Loving Husband, Father, Teacher, Director, Friend. Mervin G. Sliger passed away peacefully Tuesday, December 31st, 2019. He was born October 19, 1929, in Redlands, CA to Truman and Burnadean (Bentley) Sliger. He will be missed always by his loving wife Cindy, whom he adored and his children Jeff, Janell, Jay, Jarin, Jared and Brad. He also has seven grandchildren and three great grandchildren. Mervin Gene Sliger was born on a fall day, October 19, 1929, in Redlands, CA to Truman and Burnadean (Bentley) Sliger. His sister, Elsie Mae was born in 1931. His brother Bruce joined the family in 1934. His baby sister, Araminta (Minute) was born in 1936. His family moved from Redlands, CA to Snohomish, WA in about 1946. Merv decided to go to college, rather than follow his father into the logging industry. He had plans to become a PE teacher, but the football coach at Western Washington College pointed out that others were bigger, stronger and faster and may have the advantage in landing a job. He fell to his second love; music. His education was interrupted by two years in the Army, serving in the Korean War and quickly advancing to Sergeant 1st Class. After his service, he returned to Snohomish, married, and finished his college career at Western. He taught Math, English and Music at Custer Middle School. He also was the Librarian at Custer Middle School. After one year there, he was recruited to a job at Shuksan Junior High teaching Social Studies and Choral Music. At the same time he was teaching music in the afternoons at grade schools, including Birchwood and Sunnyland. After the music programs blossomed, he began to teach Choral music full time. He taught at Shuksan for about ten years. In 1966 he was offered the Choral teaching position at Bellingham High School. His Choral groups were award winning, distinguished and well-traveled during his tenure there. He went back to Shuksan for one more year after teaching at Bellingham for 19 years. After that year, he was brought back to Bellingham High until his retirement in 1987. After retirement, he was coaxed into teaching Music at Blaine High School and at Nooksack Valley High for one last round of spreading musical joy. His teaching schedule allowed for summer boating/fishing adventures, camping and large family gatherings with extended family and friends. It also allowed for other endeavors such as farming and running a laundry matte. His favorite saying, "I don't do nothing well" was truly him. He seldom ever sat idle. His children from his previous marriage are Jeffery Alan, Janell Marie, Jay Dana, Jarin Lee and Jared Dean. Merv married Cindy Lou Urie in 1974. Their only child, Bradley Joseph was born in 1978. Their summers were spent traveling and going to concerts at Elizabeth Park. They enjoyed travel to Mexico and Hawaii as well as to his favorite place, Disneyland. He enjoyed long walks with friends on the Board Walk or around Lake Padden. He also enjoyed wood working and had a small handy man business with his friend, Howard Urie. His passion was sports. In high school, he lettered in track, baseball and football. He was hoping to play baseball professionally, but broke his leg in a track incident with a hurdle and was never able to return to baseball at the same level. He often used sports metaphors and anecdotes in his teaching and sharing of life lessons. He was a natural leader and some of that could be credited to his time serving in the United States Army. Even after dementia progressed, he was kind and caring and ever the gentleman he always was. He remained his authentic self. His choirs loved him. It would never be his intent to boast or brag as he was a humble person. That quality was most likely a part of his popularity among his students. Because of his sports back ground, he was relatable to young men who otherwise may not have mixed sports and music. He believed there was room for both. He enjoyed all of his students, looking back with fondness and recalling many humorous and heartwarming stories. Merv’s kind heart and passion for life inspired so many individuals that knew him. It was a rare day that he wasn't stopped by former students with a warm hand shake and a hug while out and about in town. He was always genuinely happy to see them and hear of their life's journeys. His musicals at Bellingham High School were always popular and performed to a sold out venue. Some of his favorites were Sound of Music, Camelot, South Pacific, Funny Girl and Hello Dolly. Merv was our fabulous “Music Man” and so very special to so many.

The family of Mervin Gene Sliger created this Life Tributes page to make it easy to share your memories.