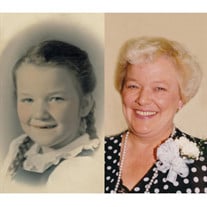 Mary Jo Wilson, age 75, passed away peacefully with her family by her side on November 19, 2015. She was born June 26, 1940 in Bellingham to Henry and Angela Roehl. She attended Assumption School, graduated from Bellingham High School and attended Seattle University. Mary Jo worked at the Federal Reserve Bank in Seattle and later at Bellingham National Bank. She married the love of her life, Jerry Wilson, on September 23, 1961 in Bellingham. Mary Jo and Jerry have been active members and volunteers at Sacred Heart Catholic Church for many years. Mary Jo was always helping others in need. For many years she volunteered with the Maple Alley Inn, the Volunteer Chore Program, and was a founding member of the Mt. Baker Kidney Center Auxiliary.Family and friends were incredibly important to her. She enjoyed spending as much time as she could with all of them, especially at the Birch Bay cabin. Mary Jo loved to cook and there was always enough food to feed the entire neighborhood when she was in the kitchen! She was preceded in death by her parents, brother-in-law Roger Swanson and sister-in-law Margaret Wilson. Mary Jo is survived by her loving husband of 54 years, Jerry, three wonderful sons; Jerry Wilson, Jr., his children Nate and Sarah, and their mother Lenette Thompson of Spokane, Joe Wilson and Jake Wilson (wife Patrice) and their daughters Haley, Janie and Josie, sister Betty Ann Swanson of Reno, NV, sister-in-law Anne Cannon (husband Robert) of E. Wenatchee and many loving relatives and friends. A Vigil Service will be held at Westford Funeral Home at 7 PM on Tuesday, December 1st. Mass of Christian Burial will be held at Sacred Heart Catholic Church at 11 AM on Wednesday, December 2nd. Reception following. Memorials may be made to the Mt. Baker Kidney Center, 410 Birchwood Ave #100, Bellingham, WA 98225.

Mary Jo Wilson, age 75, passed away peacefully with her family by her side on November 19, 2015. She was born June 26, 1940 in Bellingham to Henry and Angela Roehl. She attended Assumption School, graduated from Bellingham High School and... View Obituary & Service Information

The family of Mary Jo Wilson created this Life Tributes page to make it easy to share your memories.

Mary Jo Wilson, age 75, passed away peacefully with her family...