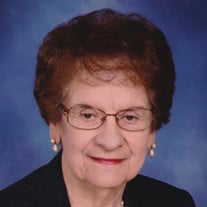 Mary Hillas Tervo, age 87, passed away in Bellingham, WA, on August 13, 2021. She was born October 29, 1933 in Hiawatha, Utah to George and Elizabeth Hillas. Mary was a Greek coal miner’s daughter. Her parents, George and Elizabeth Hillas, were immigrants from the island of Crete, Greece. They raised Mary in the tight-knit Cretan community in the hills of Carbon County, Utah and later in Salt Lake City. She was a gentle and generous soul, a good mother and friend to have near in good times or times of hardship. Tragedy struck Mary in her senior year in high school when her father passed away suddenly on Thanksgiving Day of 1950. Her mother passed suddenly at his funeral a few days later. Mary, seventeen years old, moved to San Pedro, California, beginning a new life with her older sister, Kay, and her large extended family of nephews, nieces and cousins. Mary graduated from San Pedro High School in 1951. After attending Harbor College, she worked as a secretary at Shell Oil, Union Oil, eventually finishing her career as an executive secretary to the president of Toyota Motor Sales. She retired in 1997. By Divine Providence, she was introduced to Paul Tervo, a widower, in 1969 and they married later that year. They were married for 30 years until Paul’s death in 1999. She raised Paul’s three children, Sharon, Paula and Mark as her own. Her son, Michael, was born in 1970. Mary was very involved in the Greek-American Community and its service organizations such as the Daughters of Penelope and the Southern California Cretan Association. She was also very devoted to her Greek Orthodox Christian Faith and attended first the parish of Assumption in Long Beach in her youth, then later St. Katherine Greek Orthodox Church in Redondo Beach. She served in many capacities from singing in the choir to volunteering for and later becoming the president of the St. Katherine Chapter of Philoptochos (“Friends of the Poor”). She also raised a son who became a Greek Orthodox priest. Mary was preceded in death by her husband Paul Tervo and siblings Kathryn Stavros, Mike Hillas, Steve Hillas and John Hillas. She is survived by her four children, Sharon (Steve) Harris, Paula Yoes, Mark (Lucinda) Tervo and Fr. Michael (Elizabeth) Tervo, grandchildren Morgan Harris, Shane Harris, Erica Simonetti, Allison Yoes, Amanda Esqueda, Caitlin Klemballa, Paul Tervo and Lucy Tervo, and three great-grandchildren, Liona Simonetti, Ella Esqueda, and Anastasia Klemballa, as well as many nieces, nephews, extended family and friends. Services will be held at St. Katherine Greek Orthodox Church, 722 Knob Hill in Redondo Beach, CA, as follows: Trisagion on Monday, August 23rd at 7:00 pm. Funeral Service on Tuesday, August 24th at 10:30 AM with Fr. Michael Courey officiating. Reception following at the church. Interment at Green Hills Memorial Park. Memorials may be made to St. Sophia Greek Orthodox Church in Bellingham, WA or St. Katherine Greek Orthodox Church in Redondo Beach, CA. You may share memories at www.westfordfuneralhome.com.

The family of Mary Hillas Tervo created this Life Tributes page to make it easy to share your memories.