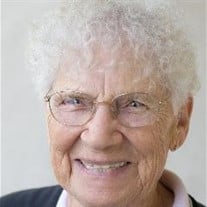 On Thursday, August 22, 2019, Mary Alice LaVerne “Burney” Payne passed away at the age of 90. Burney was born in Long Beach, California, on December 19, 1928 to Richard Lee and Frances (Jones) Pawling. She was a member of the Sac and Fox Nation of Oklahoma. On February 5, 1949, she married Raymond Edward Payne in Las Vegas. Together they raised three children, Steven, Donna, and Howard, and was delighted to celebrate their marriages to Paige Boulé, John Ripley, and Anita (Linthicum) Payne, respectively. Burney was a devoted stay-at-home mother who really did enjoy ironing, as well as cooking for family and friends. She saw it as a fun challenge when Steven and Donna, and their spouses, became vegetarians. She was always a night owl, staying up late to watch Johnny Carson, then David Letterman and Stephen Colbert…even Saturday Night Live from the very beginning. She enjoyed word games, including Scrabble, playing hundreds of games with Steven over the years. And, she was always up for cards or other games with willing players. In 1988, Burney and Ray retired to Paradise, California, where she loved landscaping and yardwork around their new home and walks among the Ponderosa pines. She looked forward to visits with their two grandsons, Forest Payne and Wilder Boulé, and step granddaughter, Brittany. Ray passed away in 2005. They had been married for over 56 years. She remained in Paradise until 2008 when she moved to Clovis, California, to live with her son, Howard and his wife, Anita. Burney enjoyed feeding birds and squirrels…and loved cats. She was a compassionate person concerned about the welfare of family and friends. She developed a vast collection of miniature clowns designed by California artist Ron Lee. Burney was preceded in death by her father, mother, husband, and Howard’s wife, Anita, one of Mom’s best friends. She is survived by her brother, Richard Leroy Pawling, children, the two grandsons and their spouses (Maria Llobet and Erin Picou), three great grandchildren (Gaven, Dahlia, and Leo), two step-grandsons (Jeremy and Justin), six step-great grandchildren, and two step-great great grandchildren. A graveside service will be held at Forest Lawn Memorial Park – Cypress (4471 Lincoln Avenue, Cypress, CA) on Saturday, September 28, 2019 at 10:30 a.m. in the Eternal Peace section. In lieu of flowers, please consider a donation to one of these organizations: 1. The Cat House on the Kings, an abandoned and feral cat sanctuary near Fresno, which is where her beloved cat, Princess Fiona, was adopted from: The Cat House on the Kings, 7120 S. Kings River Road, Parlier, CA 93648-9720. (https://www.cathouseonthekings.com/) 2. The American Macular Degeneration Foundation (https://www.macular.org/)

The family of Mary Alice LaVerne Payne created this Life Tributes page to make it easy to share your memories.