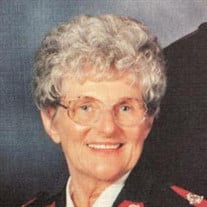 Martha Louise Beaver was born in Los Angeles, CA to Orville and Mary (Jones) Tracy on August 19, 1929 and passed away peacefully at home on June 3, 2022 at the age of 92. In the spring on 1953, seeking some adventure and a way to serve the Lord, Martha, and a corps friend formed their own Service Corps and went to Anchorage, AK to work in the corps for the summer. It was there she met Richard “Dick” Beaver, who was stationed at Elmendorf Air Force Base. The two became one in a Salvation Army wedding at the Inglewood, CA corps on June 30, 1954. But civilians they were not to be, God had plans for them and opened doors of opportunity. In October of 1954, they found themselves as assistants to the Corps Officers of Canton, OH. It was during an open-air meeting that God called Dick to officership. In September of 1955 they entered the Salvation Army Training School in San Francisco, CA. In June of 1956 they were commissioned as Lieutenants with the Sword Bearers Session. Dick and Martha served as Corps Officers in Rock Springs, WY, Pueblo and Greeley, CO, Phoenix and Tucson, AZ, Hobbs, NM, Bremerton, Olympia, Bellingham, and Yakima, WA, and one DHQ appointment in Denver, CO. Both had the privilege of attending the Brengle Holiness Institute and the International Congress in London, England in 1978. In 1985 they attended the Holy Land Congress with General Jarl Wahlstrom and then later went on a Holy Land Tour with the first group of officers from the Territory. The family grew along the way with LeRoy being born while in Training School in San Francisco, Geraldine was born in Rock Springs, WY, Terri in Greeley, CO, and Charles in Phoenix, AZ. Martha is survived by her beloved husband of 68 years, Dick; children LeRoy, Geraldine, Terri (husband Greg), Charles (Teresa), Elizabeth and Fina, grandchildren Amy, Michael, Erik, and Sarah, great-grandchildren Griffin, Cash, Elijah, and many loving relatives and friends. A funeral service will be held on Saturday, June 11 at 1:00pm at the Salvation Army, 2912 Northwest Ave, Bellingham, WA 98225. You may share memories of Martha at www.westfordfuneralhome.com.

Martha Louise Beaver was born in Los Angeles, CA to Orville and Mary (Jones) Tracy on August 19, 1929 and passed away peacefully at home on June 3, 2022 at the age of 92. In the spring on 1953, seeking some adventure and a way to serve the... View Obituary & Service Information

The family of Martha Louise Beaver created this Life Tributes page to make it easy to share your memories.

Martha Louise Beaver was born in Los Angeles, CA to Orville and...