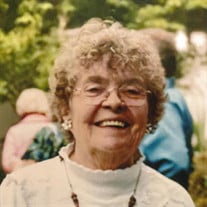 Marlene “Molly” Dickinson passed away peacefully on October 4th, 2021, after a battle with Alzheimer’s Disease. While some of her life’s memories gradually slipped away, she never forgot her husband, Bob, who cared for her and visited her up until her last days. She was born in Bremerton, Washington on February 6th, 1934, to Les and Sarah Nyblod. She was most of all a devoted wife, and mother, grandmother, neighbor, and friend. She is survived by her loving husband Bob and children Ted Lewis, Steve Dickinson, Jeannie Lamphiear, and Linda Dickinson, sisters Ruth Nyblod, Diane Watson, and half-sisters Sue, Nancy, and Mary, and five grandchildren. She was preceded in death by her daughter Zenda Lewis and son Russ Dickinson. Molly graduated from Arlington High School, and later attended Bellingham Technical College to pursue her love of cooking. She became known for her culinary skills and down-home meals, describing herself as “the one who rattles the pots and pans.” She created many epic holiday dinners for friends and family. An avid gardener, she tended to a brilliant display of hanging pots along her deck and could often be seen in her yard caring for her numerous flowers. Molly was also a skilled seamstress, once lending a hand to a neighbor who needed help with a wedding gown. Later in life, she developed a fondness for cats, and on one occasion she drove a stray to the animal shelter, only to return the next day to rescue it. With her husband Bob by her side, Molly enjoyed many years of traveling in their converted RV bus. She was always able to create a sense of home on the road, taking along her impressive collection of cooking supplies, and sometimes a cat. A celebration of Molly’s life will be held at Westford Funeral Home, 1301 Broadway, Bellingham Washington on Thursday, October 14th at 11:00 am. You may share memories at www.westfordfuneralhome.com.

Marlene &#8220;Molly&#8221; Dickinson passed away peacefully on October 4th, 2021, after a battle with Alzheimer&#8217;s Disease. While some of her life&#8217;s memories gradually slipped away, she never forgot her husband, Bob, who cared for... View Obituary & Service Information

The family of Marlene "Molly" Mae Dickinson created this Life Tributes page to make it easy to share your memories.