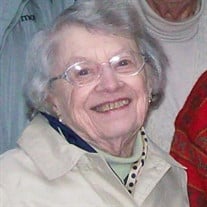 Marjorie Jane Reigstad died peacefully at home on July 25, 2016. She was 95. Marjorie was born in Lanesboro, MN, on December 10, 1920, the daughter and only child of Adolph G. and Marion A. Gullickson. She attended grade school in southeastern Minnesota and graduated from high school in Ellendale, MN (1939). Among her teachers were her mother in fourth grade and her father in band and chorus in high school. She earned a bachelor’s degree in education at Mankato (MN) State College and after teaching several years returned to school and earned a degree in Library Science from the University of Minnesota. She began her library career in the music department of Minneapolis Public Library and later became assistant reference librarian at the UNM library in Albuquerque, NM. In June of 1950 Marjorie married Paul Matthew Reigstad of Minneapolis. Their two daughters, Emily Jane and Katharine Ann, were born in Fergus Falls, MN, where the family lived until moving to New Mexico in the mid-1950s. In 1958 Marjorie, with Paul and Emily and Kathy, moved to Washington state when Paul joined the faculty at PLU in Tacoma. During Paul’s long tenure at PLU, sabbaticals in Norway and England gave the whole family an opportunity to travel, live, and develop friendships in other countries. Until shortly before her death, Marjorie corresponded with friends from those years. After retirement, in 1984 Paul and Marjorie moved to Camarillo, in Ventura County, CA, where they spent 19 rewarding years before moving to Bellingham, WA, in 2003 to be near their daughters and their families. Marjorie was preceded in death by Paul, her husband of 54 years. She is survived by daughter Emily Robson and her husband Donald and grandsons Jarrett and Kyle Robson, and daughter Katharine Reigstad and her husband David L. Davidson and grandsons David and Keith Davidson; a cousin Margaret Jensen in Minnesota; and the dedicated and supportive members of her former reading group in Tacoma.

Marjorie Jane Reigstad died peacefully at home on July 25, 2016. She was 95. Marjorie was born in Lanesboro, MN, on December 10, 1920, the daughter and only child of Adolph G. and Marion A. Gullickson. She attended grade school in southeastern... View Obituary & Service Information

The family of Marjorie Jane Reigstad created this Life Tributes page to make it easy to share your memories.