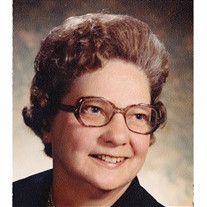 Marge Markham, age 94, passed away peacefully on January 7, 2015 at Christian Health Care Center in Lynden. Marge was born on December 12, 1920 in Miller, Nebraska. She moved to Washington with her family during the Depression. She married Talmage Cowin in 1942, he preceded her in death in 1965. She married Eddie Markham in 1966. Marge worked for the Lynden Darigold plant for 27 years and retired in 1985. She continued to do the bookwork for Eddie Markham Trucking for several more years. Eddie also preceded her in death in 2008. Marge and Eddie enjoyed going to Reno twice a year, and were otherwise always home to “watch” over the neighborhood and lend a helping hand to whomever needed it. They enjoyed sitting on the shop bench and watching the world go by. They also enjoyed their dogs Scooter, Missy, Candy, Muffin, Bubbles, and Cuddles. Marge had a pen-pal in Australia for over 40 years, whom she faithfully communicated with. One highlight in her life was being able to take a trip there, along with Pat and Peg in 1980 to visit. She also loved taking Pat and Peg to 4H horse events and tons of horse shows for many years. The family would like to thank Visiting Angels for their support and allowing Marge to live at home until September, when she moved to Lynden Manor for a short time before having to move to CHCC. Marge is survived by her daughters Patty (Jack) Maddox of Wapato, Peggy (Al) Pratt of Bellingham, grandchildren Sharon (Bruce) Paul, Charles (Faye) Maddox and their daughters Averi and Paige, and Sandra (Stephen) Changala and their children Jacob and Jessica. She was preceded in death by parents Emil “Jack” and Marie Holliday and her four brothers, Gerald, Lynn, Harley and Jack. Memorials may be made to the Alzheimer Society of Washington, 1308 Meador Ave. in Bellingham. Visitation will be held at Westford Funeral Home on Thursday, January 15th from 3-5 PM. Funeral Services will be held at Westford Funeral Home on Friday, January 16th at 11 AM. Reception following. Interment will follow at Ten Mile Cemetery.

Marge Markham, age 94, passed away peacefully on January 7, 2015 at Christian Health Care Center in Lynden. Marge was born on December 12, 1920 in Miller, Nebraska. She moved to Washington with her family during the Depression. She married... View Obituary & Service Information

The family of Marjorie "Marge" Ellen Markham created this Life Tributes page to make it easy to share your memories.