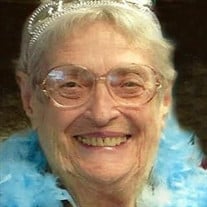 On the evening of October 6, 2016, Marge passed away at PeaceHealth St. Joseph Medical Center in Bellingham, WA. Marge was being visited, comforted and celebrated with family members all day before she passed away. Marge was 91 years old. Marge Toole was born in the town of Presque Isle, ME on May 14, 1925. She was the third child of Robert and Helen Fairweather. Marge had one sister, Arlene and one brother, Lee. Marge played the trumpet in the high school band and was very well known by all of her peers. Marge met the love of her life, Oran “Earl” Toole, while he was stationed at Presque Isle Airbase. Marge and Earl fell in love and married in 1944. Janice, their first born daughter, was born in Presque Isle and later they moved to Evansville, IN. Marge was a telephone operator for many years. They lived in the first student housing that was built for the soldiers after WWII. Gayle, their second born daughter, was born in Evansville. Marge and her family moved to Bloomington, IN and their third child, John, was born. Marge was a housewife for many years. After her children grew up, she worked in retail at Ella’s dress shop and Sears. Marge, throughout her life, was a strong woman of faith. She will be remembered by her family as always being selfless, having a positive outlook, accepting everyone, and never speaking negatively about others. She was always up for an adventure, whether it was going to Value Village or going out with her family. She enjoyed her stuffed animals, bird watching, bingo and crossword puzzles. In her last days, she even dreamed of being a national crossword champion. She was passionate about sweets, good food, jewelry, and reading. Her family all agrees that she had a great sense of humor, she was friends with everybody, and that she was the best mother, “Nanny,” and mother-in-law, that anyone could have asked for. Marge is survived by her two daughters, Janice Landin and Gayle O’Toole (husband Duane Watari), son John Toole (wife Edina Toole), five grandchildren, Kristin Miller, Gretchen Clay (husband Chris Clay), Daniel Toole, Kendra Toole, Hana Watari, and two great-grandchildren, Benjamin Clay and Teagan Miller. A private family gathering and burial were held in Bellingham. Memorials may be made to the Sardis Wildlife Center, 7472 Valley View Rd., Ferndale, WA 98248. You may share memories with the family at www.westfordfuneralhome.com.

On the evening of October 6, 2016, Marge passed away at PeaceHealth St. Joseph Medical Center in Bellingham, WA. Marge was being visited, comforted and celebrated with family members all day before she passed away. Marge was 91 years old. Marge... View Obituary & Service Information

The family of Marjorie J. Fairweather-Toole created this Life Tributes page to make it easy to share your memories.

On the evening of October 6, 2016, Marge passed away at PeaceHealth...