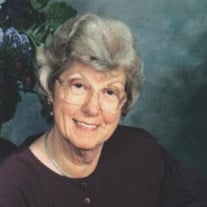 Marilyn Waldron passed away on November 9, 2020 in Lynden. She was born on September 19, 1927 in Brocton, Illinois to Frank and Berdie (Smith) Ashmore. Marilyn attended college at Springfield, South Dakota and became a teacher. Marilyn taught elementary school in Rawlins, Wyoming where she met and married Lloyd. Together, they had 3 boys and raised them in Rawlins until 1970 when they moved to Ferndale, Washington. In 1974, the family moved to their dream home in Blaine. After retirement, Lloyd and Marilyn traveled and spent time on their boat in the Puget Sound. Shortly after Lloyd 's death in 2000, Marilyn moved to the Willows Retirement Community in Bellingham and continued to travel with friends. Marilyn enjoyed spending time with her family camping, boating and being involved with the boys’ extracurricular activities. Marilyn was a member of the Blaine United Church of Christ and was active with Women's fellowship. She was also active with the Blaine Senior Center for many years as well as a member of a local PEO chapter. Marilyn enjoyed spending time with her friends and family, especially with her grandchildren, and never stopped being a teacher. She enjoyed cooking, gardening, reading, playing cards, and was a long-time member of the Mt. Baker Theater Guild. She had a contagious sense of humor and it was difficult to find her without a smile or laughing. She always had time for friends and would never hesitate to help those in need. Marilyn was preceded in death by her husband Lloyd Waldron and a son, Steve Waldron. She is survived by her sons Frank (Jodie) Waldron and Jerry (Robin) Waldron, sisters Kathryn Baird and Patricia Kadinger, brothers Alan Ashmore and Frank Ashmore, grandchildren Zoe Waldron, Lyn Waldron, Brandon Waldron, Kyle Waldron, Jacob Morehouse, Emilie Morehouse, Collin Thomas and Katie Morehouse, great-grandchildren Graham Waldron and Alfredo Gonzalez as well as many other extended family and friends. Memorials may be made to the Alzheimer’s Association. A family service is planned.

Marilyn Waldron passed away on November 9, 2020 in Lynden. She was born on September 19, 1927 in Brocton, Illinois to Frank and Berdie (Smith) Ashmore. Marilyn attended college at Springfield, South Dakota and became a teacher. Marilyn taught... View Obituary & Service Information

The family of Marilyn Waldron created this Life Tributes page to make it easy to share your memories.