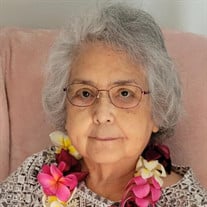 Margaret Daley passed away on May 12, 2022 in Bellingham. Margaret was born on February 23, 1934 in Kansas City, Kansas to Braulio and Felisa (Nunez) Hernandez. Margaret grew up in a segregated community in Kansas City, Kansas where she attended John J. Ingalls Elementary School with sisters Wilma and Anita. From early in her life, Margaret’s parents passed on a deep devotion to Catholic principles and service to those in need. Margaret graduated in 1952 from Westport High School in Kansas City, Missouri. She worked as a draftsman for two years at the Corps of Engineers. In 1954, Margaret entered the religious order of Our Lady of Victory Missionary Sisters in Huntington, Indiana. Although it was not her life’s calling, the experience as a nun paved the way for the next chapter in life. She went on to earn a Bachelor’s degree in Elementary Education in 1962 from St. Teresa College (Avila University) in Kansas City, Missouri. During the next three years, she taught in the North Kansas City elementary schools and did volunteer work with Catholic charities. Margaret then pursued a Master’s degree in Social Work at St. Louis University. It was there she met the one and only love of her life, Mike Daley. It was love at first sight for Mike, and they married a few months later, in 1966. Margaret and Mike were blessed with three children, Ann, Carolyn and Kevin, and two grandchildren, Michael and Shannon. Margaret stayed home to care for their children and home through much of their early family years. She eventually returned to work outside the home running an organization that matched elderly people as housemates, before deciding to retire. Margaret and Mike enjoyed traveling to many countries overseas, visiting historic Catholic sites in Rome, Italy and Ireland. Her favorite destination was the Swiss Alps. Mike passed away two days before their 54th anniversary in 2020, but Margaret’s deep faith and devotion to Our Blessed Mother Mary carried her through more than two years without her beloved husband. Margaret lived her remaining years with Ann, Michael and Shannon, blessing them with her wisdom, patience and love. Margaret is preceded in death by her beloved husband John Michael Daley, Jr., her daughter Carolyn Daley, parents Braulio and Felisa, and sister Wilma Avila. She is survived by her daughter Ann Daley, her son Kevin Daley, grandchildren Michael and Shannon Daley, her sister Anita Schroeder, as well as many nieces, nephews, other relatives, friends and neighbors. A Mass of Christian Burial will be held on Thursday, May 26, 2022 at 10:30 a.m. at Assumption Church in Bellingham followed by a graveside service at Bayview Cemetery. Memorials may be made to Hope House in Bellingham.

The family of Margaret Daley created this Life Tributes page to make it easy to share your memories.