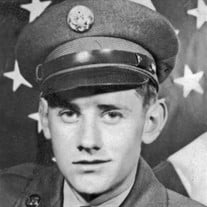 Larry Johnson of Bellingham, WA, passed away on Sunday, January 3, 2016 in Bellingham. Larry was 84, born on December 5, 1931 in Vancouver, B.C. He grew up in Ladner, B.C. until he moved to Bellingham at age 16. Larry graduated from Bellingham High School. He joined the Army in April 1952 in the 844th Engineer Aviation Battalion at Fort Huachuca, AZ. He went to Beale AFB in Jan. 1953 and then as a Corporal, went to Alaska for summer training as a mechanic. His face lit up whenever telling of his adventures during his service. He maintained contact with his Army buddies throughout his life. Larry married the love of his life, Colleen Todahl, in 1955 in Coeur d’Alene, Idaho. He was an avid hunter and salt water fisherman who later built his gillnetter and fished commercially. In his spare time he built two of his family homes and with the help of his family, was responsible for the Clock Tower at the Lynden Fair Grounds. He worked at Mobile Refinery for many years before going to the Control Shop for the Physical Plant at Western Washington University as a mechanical Engineer. At the time, he was the first Engineer in the state of Washington who was self-taught. He designed and worked on the first central HVAC control system for the campus and later conversions to computerized systems. He creatively solved many campus mechanical issues, being solely responsible for keeping the campus functioning many times. After retiring in 1992 he formed his consulting business working almost entirely for Woodstone Pizza Ovens. He was a major part of the research and design team. His drafting skills were no less than an art form to be admired by many. He had a great sense of humor and he loved to make his friends laugh whenever coming across his next great joke. He loved his work and devoted his spare time to helping many friends and family members along the way. He was a humble and unique man who was admired by friends and peers for his talents, ingenuity and devotion to everything he set his mind to. He was preceded in death by his sister Marlene Fullner. Larry is survived by his wife Colleen; daughter Lou Ann Johnson; sister Ruth Sinclair and numerous nieces and nephews. A gathering in honor of Larry’s military service will be held at Westford Funeral Home at 1 PM on Thursday, January 7th.

Larry Johnson of Bellingham, WA, passed away on Sunday, January 3, 2016 in Bellingham. Larry was 84, born on December 5, 1931 in Vancouver, B.C. He grew up in Ladner, B.C. until he moved to Bellingham at age 16. Larry graduated from Bellingham... View Obituary & Service Information

The family of Lawrence "Larry" Johnson created this Life Tributes page to make it easy to share your memories.

Larry Johnson of Bellingham, WA, passed away on Sunday, January...