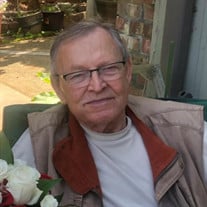 Larry Wilcox, age 79, passed away in Bellingham on Saturday, April 10, 2021. He was born October 2, 1941 in Superior, WI to Vernon and Eileen (Price) Wilcox. He married Marilee Kriz on July 27, 1963 in Rapid City, SD. Larry proudly served in the United States Air Force for four years. Larry and Marilee have been active members of Church of the Assumption since 1978. Larry worked for Puget Power for many years, retiring as a supervisor at age 55. He was grateful for his many blessings, including the kidney he received 14 years ago which extended his life. He was an outdoorsman who enjoyed boating, fishing, hunting and spending time with his family. Larry’s family will miss his wisdom, his laugh and his wonderful stories. He was preceded in death by his parents, his brother Chuck and his sister Janet. He is survived by his loving wife of 57 years, Marilee, children Terry (Tammy) Wilcox, Nathan (Kelli) Wilcox and Diane Miller, grandchildren Brandon (Mel), Austin (Nicole), Zach (Blaik), Remington and Makena, 8 great-grandchildren, brothers Gary, Dan and Robert, and many loving relatives and friends. Mass of Christian Burial will be held on Tuesday, April 13th at 10:30 AM at Church of the Assumption and will also be livestreamed at the same location as all of the Assumption Masses at https://www.facebook.com/catholicjeffreyhmoore/. Larry will be laid to rest at Tahoma National Cemetery in Kent, WA. You may share memories with the family at www.westfordfuneralhome.com.

The family of Larry Martin Wilcox created this Life Tributes page to make it easy to share your memories.

Larry Wilcox, age 79, passed away in Bellingham on Saturday,...