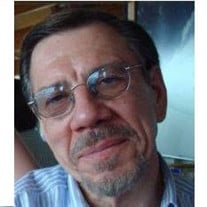 Kerry Dennis Hayes passed away unexpectedly on January 4, 2016 from complications related to previous cancer treatment. He was 73 years old. In 1960, after graduating from Springfield High School in Oregon, Kerry joined the United States Air Force where he served four years. In the Air Force Kerry was trained in electronics, which led him to his 36 year career as a computer programmer with IBM, San Jose. In addition to his “Day Job”, Kerry taught computer programming classes in the Computer Science Departments of San Jose City College, Deanza College, and Gavilan College. Kerry retired in 2001, in Bellingham, Washington, and unable to be a true retiree, he developed online programming classes for SJCC where he could work from his home. Teaching was Kerry’s true passion, and there is no doubt that he would have continued teaching until he was forced to quit. For entertainment, Kerry got great pleasure from playing and transposing music for his many harmonicas. Kerry was preceded in death by his son, Michael Hayes and his brother, Dwight Hayes, who died in Viet Nam. Kerry is survived by his wife and love of his life for over fifty years, Diana, his daughters, Lori Polevoi and Ronda Hayes, his grandchildren, Valerie and Aaron Polevoi all of Bellingham, Washington. He is also survived by his brother, Lynn Hayes of Oregon City, Oregon, his Air Force Buddies, Bruce Martin of Lafayette, California, Dick Hardy of Kokomo, Indiana, and Dan Saindon of Hawaii Although Kerry was a quiet man, his daughters remember him as being the greatest audience for his own jokes.

The family of Kerry Dennis Hayes created this Life Tributes page to make it easy to share your memories.