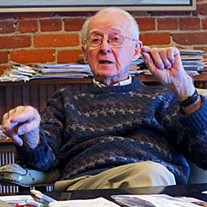 Ken Imus, age 90, passed away peacefully at home in Bellingham, WA, on Sunday, March 19, 2017. He was born May 24, 1926 in Bellingham to Loren and Mary Imus. Ken graduated from Bellingham High School in 1944. During WWII he served on a U.S. Naval ship and also studied engineering. Following the war, Ken returned to Bellingham. Intent on pursuing his passion for hot rods and racing, he opened his own auto body shop. In 1948 he married his high school sweetheart, Barbara Quinby. The racing stopped but his passion for cars didn’t. In 1949 the Golden State of California beckoned, and Ken and Barb moved to San Jose where they started their family and began Ken’s career in the auto sales business. His career led to ownership of multiple Ford dealerships, taking the family first to Dallas, and later El Paso, Texas. California continued to beckon, however, and in 1964 they returned to the SF Bay Area where they lived until they returned to Bellingham in 1997. Ken was passionate about his work and was ALWAYS dreaming up and implementing a new project. During his time operating his dealerships he found that he enjoyed designing and building the dealer facilities as much as running the business, igniting his passion for building and architecture. Beginning in the 1970s, Ken set out to revive Fairhaven by remodeling vacant and historic buildings. Over time, these architectural gems were restored and Fairhaven grew into a model for urban renewal. Fairhaven is now a popular tourist destination and continues to thrive. In more recent years, Ken’s interests included developing in Blaine. Ken was preceded in death by his wife of 67 years, Barbara, his son Tim Imus and brother Keith Imus. He is survived by son Brad (Jean) Imus, daughter-in-law Teresa Dalton, grandchildren Derek (Adriana) Imus, Brent Imus, Matt Imus, Kate Imus (Kevin Misiuda), Ashley (Coleman) Paige and Tessa Dalton, and great-grandchildren James and Chloe. Memorials in Ken’s name may be made to the Whatcom Hospice Foundation, 2901 Squalicum Parkway, Bellingham, WA 98225. A special thank you to all of Ken’s caregivers over the past several years, we couldn’t have done it without you. A Celebration of Ken’s life will be held at Westford Funeral Home on Monday, March 27th at 11 AM. Reception following across the street at Broadway Hall. You may share memories with the family at www.westfordfuneralhome.com.

Ken Imus, age 90, passed away peacefully at home in Bellingham, WA, on Sunday, March 19, 2017. He was born May 24, 1926 in Bellingham to Loren and Mary Imus. Ken graduated from Bellingham High School in 1944. During WWII he served on a U.S.... View Obituary & Service Information

The family of Kenneth C. Imus created this Life Tributes page to make it easy to share your memories.

Ken Imus, age 90, passed away peacefully at home in Bellingham,...