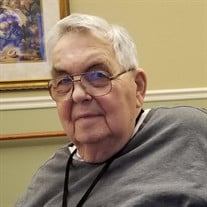 Karl Forrest Kern, age 92, passed away peacefully on December 7, 2020 - the 19th anniversary of his beloved wife Ellen’s death. Karl was born December 12, 1927 in Everett, Washington and moved with his family to Bellingham in 1928. His father, Frank Kern, emigrated from Austria-Hungary. His mother, Olympia Hanson Kern, was raised in Hoodsport, WA. Karl met and later married Ellen Pierce of Vancouver, BC in 1961 after being introduced on a blind date set-up by mutual friends. Karl faced adversity in his teens when his father was killed in the 1943 Boeing B-29 crash in Seattle. He took several jobs while in high school to help support his family including long shoring and various positions at the Bellingham Post Office. He often got into “hot water” by skipping class to earn money for his family. He also made several under age attempts to enlist in the military during WWII to prove his patriotism. After graduating from Bellingham High School in 1946, Karl officially enlisted in the U.S. Army and was stationed in occupied Japan after WWII. He returned to the Postal Service upon his honorable discharge, retiring in 1990 after 45 years as a city and rural carrier. He touched the lives of many on his mail route through his dedication to the job, amicable style, and sense of humor. He was honored in 2018 with a 70-Year Union Service Award from the National Rural Letter Carrier Association. In retirement, Karl loved garage sales and was a regular presence around town at Barter’s, Lee’s Drive-In, and Bellis Fair for coffee hour with his many friends. Karl lovingly cared for his wife, Ellen, through a prolonged illness until her passing in 2001. In his final years, Karl was made honorary ambassador of his retirement facility for his cheery welcoming of staff and visitors. Karl was a 50-year veteran of the Boy Scouts recognized with the Daniel Carter Beard Masonic Scouter Award, the OA Vigil Honor, and the Silver Beaver award for distinguished service. For over 40 years, he was a fixture at the ‘Hands across the Border’ Scouting celebration where he sat under the giant maple tree trading badges. Karl was a 70-year Life member of Whatcom Masonic Lodge No. 151, Life Member of Nile Shriners, and member of Scottish Rite. He served as Worthy Patron of Sehome Chapter #17 OES and on board of Bellingham Assembly #17 IORG, awarded the Grand Cross of Color for outstanding service. Karl was preceded in death by his parents, his sister Minerva (Kern) Hunt, and his beloved wife of 40 years - Ellen Rose Kern. He is survived by his daughter Heather Kern and son Frank Kern along with many nieces, nephews, and in-laws. He will be dearly missed. The family encourages donations in Karl’s memory to Washington Masonic Charities/Scholarship Program, P.O. Box 65830 University Place, WA 98464. www.wa-masoniccharities.org

Karl Forrest Kern, age 92, passed away peacefully on December 7, 2020 - the 19th anniversary of his beloved wife Ellen&#8217;s death. Karl was born December 12, 1927 in Everett, Washington and moved with his family to Bellingham in 1928. His... View Obituary & Service Information

The family of Karl Kern created this Life Tributes page to make it easy to share your memories.