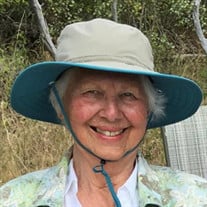 Karen Foisy, age 83, passed away in Bellingham on April 18, 2020. She was born July 7, 1936 in Spokane, WA to Osborne and Osa Belsby. She grew up on the family farm South of Cheney. She graduated from Cheney High School. She attended WSU, mastering the skills of a professional secretary. At WSU, she and Maurice met and became the loves of each other’s lives. They began their life of 63 years together on August 31, 1956 in Spokane. Both attended Gonzaga University in Spokane. In their marriage they had two children, Christine and Kjel. Karen was connected to the land and work at an early age. From her father, she inherited a work ethic and, throughout her life took pride in her Nordic heritage. She began at age 14 skinning a D-6 Cat pulling a combine over the wheat hills of the farm. When she, with her new family moved to Washington D.C. Karen attended Georgetown School of Foreign Service and went to work as a secretary and staff member for Sen. Henry “Scoop” Jackson and later as a personal Secretary to Congressman Tom Foley. She and her family spent four years in Eugene at the university where she earned a degree in History, The family moved to Bellingham in 1970 where she joined the staff of the newly founded Huxley College of the Environment. She spent 30 years shepherding students through its programs. During her years in Bellingham she remained actively involved as a farmer/cattle rancher in Eastern Washington. Upon retirement from WWU she worked full time as owner/operator of a ranch south of Cheney, spending summers moving back and forth. Her manner of owning was stewardship with respect and preservation of the land and, above all, providing sanctuary for wildlife. Karen has bequeathed this trust of stewardship to her granddaughter. Karen’s was a remarkable character. She was one of a kind, particularly for what she was not. For example, unlike almost all of us, she didn’t have a phony bone in her body. You never saw her do something that was at odds with her words. She was never mean nor would she even say bad things about anyone. She didn’t see fit to even bend her words into flattery. In whatever dealings she had, it was her direct, honest, practical and transparent self you faced. It was not unusual for Karen, on the street, to encounter a student she had advised 30 years ago and greet them by name. Everyone: family, friends, students, business associates learned from Karen, not from her words but from the way she carried herself in the world. By her example, she taught people how to love. Karen had many pleasures. She loved travel, going many times to Norway, taking numerous trips to Europe with friends and to Mexico and South America. Karen was an incredibly generous host to friends and family and as was often the case, their friends and family. Summer backyard parties were a special occasion. No matter the size of the gathering, she always made everyone feel welcome and a part of the family. Karen enjoyed being helmsman of the Malolo which she piloted with family and friends throughout the Salish Sea. Karen had been an athlete in high school and college (pitcher), and she continued to take pleasure in sports as an avid Zags fan, knowing the background and abilities of all the players and following the team, never missing a game. She stayed a true fan of the Seattle Mariners even when they didn’t deserve it. She enjoyed reading, almost always biographies and art, except for “People” which was knowledge you had to have. Her deepest pleasure came in her love of animals. Over the years there were many loved pets as part of the household, two worth special mention were “Spartacus” and “Tommy.” She took joy in seeing any baby or young animal learning from or being taught by a parent, crows, raccoons, coyotes, deer and cattle. She loved watching and supporting growth into life. Karen was preceded in death by her son Kjel Foisy, by her parents and special uncle Shell Belsby. She is survived by her loving husband Maurice, daughter Christianne Foisy, granddaughter Ashley Mengoni (Jimmy Davis) and their daughters Paislee Mae and Vida as well as many friends and relatives. She is also survived by her brothers Donel, Arne, Gary and Shell “Ole” Belsby and sister Nancy Belsby to all of whom she continued to be a loving and beloved Big Sister through thick and thin. A family gathering will be held in Cheney this summer. You may share memories with the family at www.westfordfuneralhome.com.

Karen Foisy, age 83, passed away in Bellingham on April 18, 2020. She was born July 7, 1936 in Spokane, WA to Osborne and Osa Belsby. She grew up on the family farm South of Cheney. She graduated from Cheney High School. She attended WSU, mastering... View Obituary & Service Information

The family of Karen Belsby Foisy created this Life Tributes page to make it easy to share your memories.