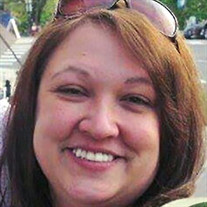 Julie Henderson, age 48, passed away peacefully surrounded by her family, at Harborview Medical Center in Seattle on Monday, March 26, 2018. She was born August 30, 1969 in Bellingham to Wayne Clapper Sr. and Priscilla (Nelson) Clapper. Julie’s greatest joy and achievement was raising her son Christopher. Later, Julie met Cliff Henderson and they were married on August 16, 2009 in Bellingham. Julie had a long career as a dental assistant in Whatcom County. She enjoyed walking her dogs, painting, spending time at Birch Bay, and listening to her son Christopher play music. Julie was a beautiful person, inside and out; she was bubbly, inspiring, and generous, as well as caring, outgoing, and she really loved people. Julie was preceded in death by her parents and is survived by her husband Cliff Henderson, son Christopher (Kelsey) Stainback, five siblings: Wayne (Jill) Clapper, Doug (Sheri) Clapper, Torri (Dale) Silva, Jodie (Brian) Thompson, and Sandra (Byron) Reed, as well as Cliff’s brother Doug (Renee) Henderson, and mother-in-law Brooke Johnson. She was adored and will be dearly missed by many loving relatives and friends. A celebration of Julie’s life will be held at a later date. You may share memories with the family at www.westfordfuneralhome.com.

The family of Julie A. Clapper Henderson created this Life Tributes page to make it easy to share your memories.