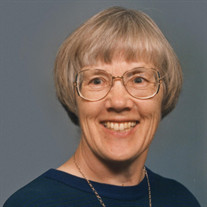 Judith L. Russo died on December 24, 2017 in Bellingham, WA. She was born to Charles and Kathryn Watke on November 23, 1935 in Milwaukee, WI. Judy received her B.A. degree from the University of Wisconsin in 1962 and later moved to Seattle where she was married to Oscar Noel for a short time. She earned a Master of Librarianship from the University of Washington in 1967. Judy met Sal Russo while they were both at the University of Washington. They were married in August 1967 and then spent the next nine months in Sacramento, CA, where she was employed by the Sacramento Public Library. In June 1968 they moved to Bellingham, WA, where Judy was initially employed by the library at Western Washington University (WWU) while Sal began his career in the Chemistry Department there. They were blessed with two children, Amy and Alan. Judy was very proud of being a stay-at-home mom for them. The family lived in Bellingham except for three exciting and formative years (1977-78, 1984-85, and 1993-94) while Sal was on sabbatical leave at the University of Colorado in Boulder. Judy loved her family and was privileged to be part of the development of her children and grandchildren. Judy took great pleasure in caring for all the cats she ever had: Benji, Emma, Sunny, Tawny, and Ben. She especially enjoyed cradling a cat on her lap as she watched television. In addition, she had great admiration for quilts and used them to decorate her home. Judy had a deep appreciation for the beauties of nature such as deer passing through the yard and hummingbirds feeding on fuchsia on the deck. She was in awe of the changing aura of sunsets seen from her living room window. Judy and Sal had several church homes that successively included St. James Presbyterian, Birchwood Presbyterian, and most recently First Presbyterian Church. Her favorite job was being a bookkeeper for the Association for the Development of Computer-Based Instructional Systems (ADCIS) from 1979-1990. It was there that she formed deep friendships with Gordon Hayes, Joan (Hayes) Arnold, Peggy Bishop, and Ursula Rozinski. The family thanks Erin Baumgart (ARNP), Dr. Greg Anderson, and Jeniffer Tobon (ARNP) for their excellent medical care. Highgate Senior Living Center provided a safe and comfortable setting for Judy during her last year. Jenn Gray who is head care partner at Highgate had a special ability to communicate with her. We thank Pamela Cushing for her devotion to Judy and are grateful to Hospice for providing comfort at the end of her life. Judy was preceded in death by her parents, brother Chuck Watke, brother Mark Watke, former sister-in-law Nancy Watke, brother-in-law Carmelo Russo, and sister-in-law Sara Tangarone. She is survived by Sal, her husband of 50 years; daughter Amy Russo Brockhaus who is deputy director for Mountains to Sound Greenway, son-in-law Andreas Brockhaus, and grandson Holden in Seattle; son Alan Russo who is an associate vice president for Callison, daughter-in-law Liza, granddaughter Imani Bender, and grandson Gavin in Seattle; sister Doris and brother-in-law Bill Halliburton in Johnson Creek, WI; brother Bill Watke and sister-in-law Mary in Green Bay, WI; and sister-in-law Janet Watke in Camano Island, WA and numerous nieces, nephews, and cousins. Contributions in her memory may be made to Childcare Worldwide, 315 Lakeway Drive, Bellingham, WA, 98225 or to a charity of your choice. Please join us for a celebration of Judy’s life at 1:00 PM on Saturday January 13, 2018 at First Presbyterian Church, 1031 Garden Street, in Bellingham, WA, with a reception to follow the service. Please share memories with the family at www.westfordfuneralhome.com.

Judith L. Russo died on December 24, 2017 in Bellingham, WA. She was born to Charles and Kathryn Watke on November 23, 1935 in Milwaukee, WI. Judy received her B.A. degree from the University of Wisconsin in 1962 and later moved to Seattle where... View Obituary & Service Information

The family of Judy Russo created this Life Tributes page to make it easy to share your memories.