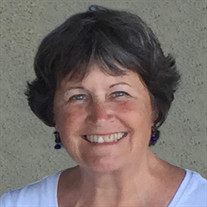 Judy Hagan, 72, returned to her heavenly Father on May 6, 2017 in Bellingham, WA. She was born on December 16, 1944 in Pasadena, CA to Elswurth (Mac) and Francis McFarland. Judy graduated from UCLA with a degree in History and a minor in French. She took a year off from college and traveled to Lille, France to work as an Au Pair for a family with 4 boys. In 1969, she met the love of her life, Stephen Hagan whom she married a year later on July 4, 1970. To Judy’s dismay, they soon moved to Ketchikan, Alaska for a minimum of two years. She and Steve ended up loving Alaska and they lived happily there for 27 years, boating, fishing and beach combing in the summers; skiing, lake skating and socializing in the winter with so many great friends and families. Judy’s fondness for travel and passion for teaching manifested in her professional career as she worked at Alaska World Travel and taught at the Community College, Clover Pass School and eventually retired from Schoenbar Junior High. She enjoyed working as a cruise lecturer for 18 years sailing the rugged waters of Alaska and giving talks about the Alaskan wildlife and Alaskan city adventures during the summers. She quickly learned the treasures of the ocean and charm of the small communities helping some unseasoned ship captains find little known sea lion rookeries. Judy often expressed that the greatest gift, and surprise of her life, was giving birth to triplet boys Matthew, Bradley and Robert in July 1974. From that point forward Judy centered her life on the care of her boys. She never tired of being a mom, including all the duties to raise three babies; such as cooking, bottle washing, changing cloth diapers, transporting, praying and finally singing the boys to sleep each night. As the boys excelled in swimming, she was well-known in the regional swimming community as an active parent hosting other young swimmers and working tirelessly each home meet. In 1997, Steve’s career took them to Port Alice, BC where they lived for seven years. She enjoyed the adventures of the remote town, fishing and golfing and some very special friends. For a person who did very little ice sports, she took up curling here and was on the winning team the last bonspiel she curled. Judy and Steve retired to a home on a golf course in Sudden Valley, just out of Bellingham, in 2004. Her hobbies included golfing, skiing, curling, tole painting and creating homemade cards. Throughout her life Judy was devoted in her faith to Christ. She was a deacon at Birchwood Presbyterian Church, attended bible studies and prayer groups at the church. She was a PEO sister and volunteered countless hours with Love, Inc. She had everything, grace, beauty, compassion, thoughtfulness and intelligence. Judy will be remembered as always having a smile on her face, a warm greeting for all and reverence for God’s grace. She was preceded in her death by her parents Mac and Francis McFarland. Judy is survived by her husband Steve, sons Matt (Christa) Hagan, Brad (Stacy) Hagan, Rob (Meredith) Hagan, sister Casey Anderson, brother Jim (Chris) McFarland, grandchildren Harrison, Madison, Hunter, Lashlee, Payton, Parker and numerous nieces, nephews and cousins. A celebration of life will be held at Birchwood Presbyterian Church at 2 pm on July 8, 2017. In lieu of flowers, donations in Judy’s name can be made to Whatcom Love, Inc., 1998 Midway Lane, Bellingham, WA 98226.

Judy Hagan, 72, returned to her heavenly Father on May 6, 2017 in Bellingham, WA. She was born on December 16, 1944 in Pasadena, CA to Elswurth (Mac) and Francis McFarland. Judy graduated from UCLA with a degree in History and a minor in French.... View Obituary & Service Information

The family of Judith M. Hagan created this Life Tributes page to make it easy to share your memories.