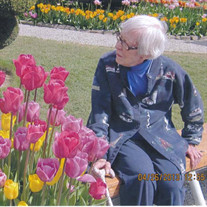 Juanita Frieda Thorpe, of Bellingham, WA, passed away on Wednesday, April 15, 2015. She was born March 5, 1927 in the parsonage of St. John’s Lutheran Church in Sherwood, Ohio, and was the eldest daughter and the fourth of nine children to be born to Rev. George and Clara (Schroeder) Maassel. She attended Ridgeville High School where she played the clarinet, ran track, and was a cheerleader for the basketball team. Juanita graduated as the salutatorian of the Class of 1945, which boasted 19 members and gave a speech titled “Dreams Become Reality.” She left the family home in 1945 to enter nurses training at the Lutheran Hospital in Fort Wayne, Indiana and graduated with her Registered Nurse diploma. Here she met, Oliver E. Thorpe, Jr, who was attending Indiana Tech, also in Ft Wayne. They fell in love and on January 27, 1951, were married by her father at his church in Napoleon, Ohio. She was a dedicated and caring nurse for more than 20 years. Juanita and Oliver lived in Indiana, Virginia, New York, Maine, Wisconsin, Delaware, and finally Washington where they were members of Grace Lutheran Church in Blaine. Juanita enjoyed family vacations, especially their trip to Disney World to celebrate their 50th wedding anniversary, trips to Mexico arranged by their son, Dan, and family reunions. Juanita was preceded in death by her parents; brothers Paul, Lester, and Norman Maassel, her sister, Lois Wesche; and pets Pretty Bird, Race, Frosty, and Venus. She is survived by her husband of 64 years, Oliver; her cat Athena; daughter Pat (Butch) Hinchey; son Daniel Thorpe; brothers Delmar and Richard Maassel; sisters, Ruth McClain and Miriam Neumann; and numerous nieces and nephews. Juanita lived a quiet life centered on her love for Jesus, her family, and her pets. She was a nurturing and loving nurse, a devoted wife and mother, and a gentle Christian friend. She is resting in the arms of her Savior, already welcomed by many of her family and friends. The rest of us look forward to that day of reunion when we are all blessed by God’s grace. Memorials may be made to Grace Lutheran Church, P.O. Box 1646, Blaine, WA, 98231. A graveside service will be conducted by Pastor Aaron Zuch at 1:00 p.m., Tuesday, April 21, 2015, at Greenacres Memorial Park.

Juanita Frieda Thorpe, of Bellingham, WA, passed away on Wednesday, April 15, 2015. She was born March 5, 1927 in the parsonage of St. John&#8217;s Lutheran Church in Sherwood, Ohio, and was the eldest daughter and the fourth of nine children... View Obituary & Service Information

The family of Juanita F Thorpe created this Life Tributes page to make it easy to share your memories.

Juanita Frieda Thorpe, of Bellingham, WA, passed away on Wednesday,...