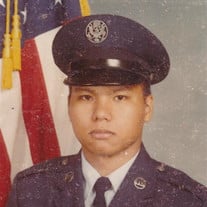 Joe Pablo, age 53 of Burien, WA, passed away on July 25, 2018. He was born October 7, 1964 in Ogden, Utah to Jesus and Dorothy (Muna) Pablo. Joe graduated from Bellingham High School in 1983 and went on to serve as a Captain in the U.S. Air Force, retiring after 20 years of service. He earned his Bachelor’s degree and Masters from University of Washington. Joe served as a police officer with both Bellingham and Tacoma Police Departments and later worked for Alaska Airlines. He enjoyed watching his grandchildren and he will be remembered for being a great son, father, brother, uncle and grandfather. Joe was preceded in death by his son Joseph M. Pablo, Jr., brother Steven B. Pablo, nephew Anton J. Leslie and father Jesus M. Pablo. He is survived his mother, Dorothy Pablo, daughter Morgan (Andrew) Maldonado and their children Anthony and Evelyn, daughter Stephanie (Michael) Schmeltzer, siblings Debra Hoglund, Valerie Piccioni, Cheryl (Dale) Richards, Connie Pablo and Jesse Pablo; nieces, Chavalle, Kailani, and Daniella; grandnieces, Sanaiyah and Mianie; and his fiance Chris Ludlum; and many loving relatives and friends. Memorials may be made to the Salvation Army, Veterans Affairs Services, 2912 Northwest Ave. Bellingham, WA 98225 or Child Fund International, PO Box 26511 Richmond, VA, 23261-6511. Mass of Christian Burial will be held at Church of the Assumption at 12:30 p.m. on Friday, August 3rd. You may share your memories of Joe at www.westfordfuneralhome.com.

The family of Joseph M. Pablo created this Life Tributes page to make it easy to share your memories.