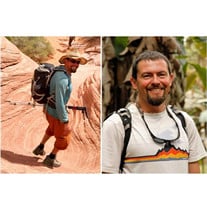 Jon Greenwood, energetic doer, playful friend, and loving husband and father, died, surrounded by his family at home on December 18th, 2016 from Creutzfeldt-Jakob disease at the age of 46. Jon was a force of ambition and action, a man who plunged into every endeavor with unbridled energy and confidence. He wasted not a minute, as if he knew he had to get in twice the living in half the amount of time. He relentlessly pursued the positive aspects of the people he met, the wild places he explored, and his numerous business endeavors. At the center of Jon’s life were his two lovely daughters, Hilary and Sally, and his wife, Rachel. Jon was a dedicated father and husband; in his eyes the sun rose and set on them. Of primary importance to him was spending time with his family: playing games, traveling in their truck camper, hiking, boating, biking, snowboarding and sharing the wonders of the West. During his summers working in Alaskan fish canneries, he met the love of his life, Rachel, in 1993. During Rachel and Jon’s 23 years together, his love, respect, and admiration for her was like a badge of honor he wore on his sleeve. Jon was extremely driven and pursued every opportunity with a “can-do” attitude. He accomplished considerable success in his business endeavors – Bellingham real estate, Skyline Electric, Kulshan Brewing, and most recently Coastal Insurance Group, and treasured the creativity, hard work and thrill of building a business. He was skilled at calculating risks associated with pushing the edges of possibility. Jon truly lived life to its fullest; imparting a sense of place wherever he traveled, driven by curiosity to inspect that one last twist of the canyon or final crest of the hill, just to see what was beyond. Residing in Bellingham for 23 years, Jon was excited by what he identified as the town’s front yard (San Juans), the side yard (Galbraith), and the backyard (North Cascades). He also treasured the Canyon country, exploring Southern Utah extensively during many family trips and adventures with friends. Every dirt road led to a new opportunity to explore and an epic journey to be had. Jon was an avid sports fan who enjoyed strong coffee and good beer. He was frequently found pouring over maps and guidebooks, scheming up the next big adventure. Jon had a sense of childlike wonder followed by mischievous action, all in the name of good-hearted laughter. He loved capturing each moment and documenting each adventure through the lens of his camera. Chess and cribbage were among his favorite games to play with friends. Born and raised in Oregon, Jon grew up as a proud Oregon Ducks fan, though an OSU Alumni. His family and friends will remember his enthusiastic laughter, radiant smile, selfless generosity, sage advice, and competitive abilities. His positive energy and enthusiasm for life was contagious. Everything and everyone that was touched by Jon’s “orbit” was improved by his influence. A celebration of Jon’s life will be held at the Broadway Hall, 1300 Broadway, Bellingham, WA, on Saturday, January 7th, 2017 at 11:00 am. Memorial donations can be made to WMBC Whatcom Mountain Bike Coalition and Bellingham Youth Paddlesports. Share your memories of Jon at www.westfordfuneralhome.com.

Jon Greenwood, energetic doer, playful friend, and loving husband and father, died, surrounded by his family at home on December 18th, 2016 from Creutzfeldt-Jakob disease at the age of 46. Jon was a force of ambition and action, a man... View Obituary & Service Information

The family of Jonathan J. Greenwood created this Life Tributes page to make it easy to share your memories.