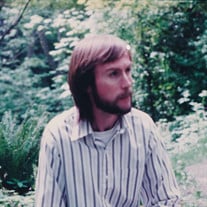 John Allen Odell, age 63, of Bellingham, WA passed away at Hospice House on May 10, 2019 after a short battle with cancer. He was born December 19, 1955 in St. Joseph, Missouri and was adopted when he was six years old by Allen and Beverly Odell. John grew up in Ferndale and graduated from Ferndale High School in 1974. One of the most special times in his life was being taught to fly small planes by his father and working as a pilot for a short while. John worked in carpentry locally and eventually moved to Seattle where he worked in construction. Just before he turned 30 in 1985 he suffered a massive stroke which left him with barely any speech and his right side mostly paralyzed. Despite a grim diagnosis, John was determined to walk again and to regain some speech. After a few years of very hard work he was living on his own and able to walk a few miles a day. He enjoyed taking walks along wooded trails by his favorite stream and one day decided to relearn how to use his camera with his left hand in order to capture some of the beauty he saw around him. Photography became his passion and he was soon taking photos of flowers and nature scenes. On his own he decided to make greeting cards with his photos, which he put together himself, to sell under the name of Rising Stars. He was successful in securing space for them in a few locations and also had some of his photos enlarged which were displayed locally and also in a show at Allied Arts. He won a national award for a photo of the tulip fields and with the help of a couple dedicated friends wrote an amazing book of letters about his thoughts on different topics related to God and his everyday life. His desire to accomplish goals like these were a driving force in his life and also gave him a purpose. But the single most important part of John’s life was becoming a Christian and discovering the peace, strength and wonder his love for Jesus Christ and God gave him. He could read very little but he could recognize words and memorize them and could also learn steps to use things like his computer. After a close friend read the Bible to him several times, John used those same gifts to become familiar with it. He knew the Bible so well that he could point out verses that expressed the messages and beliefs that he wanted to share with others. To be able to communicate this way and spread the word of God was challenging but also very rewarding, and fulfilling, for him. John was an inspiration to so many with all he accomplished despite the obstacles and limitations he lived with. His positive attitude and big smile naturally drew people to him. He loved sharing his faith and was also very appreciative of each interaction he had with others. Over the last several years John’s mobility in getting out amongst people lessened as he dealt with more health issues but he never wavered in his desire to see people happy and living with love and respect for one another, looking forward and leaving the past behind, staying strong in their faith and ultimately, accepting and rejoicing in God’s plan for each of us. In these last few months he felt both thankful and blessed that he would soon be going home to his Heavenly Father, and in that, he found the strength and peace his faith always gave him. He’s survived by his mother, Beverly, of Bellingham, and numerous cousins and friends. He was preceded in death by his father, Allen, in 1974. There will be a celebration of Johns life at Hillcrest Church on Saturday, June 1st at 1:00 pm. In lieu of flowers, donations may be made to Hillcrest Church or Whatcom Hospice House.

John Allen Odell, age 63, of Bellingham, WA passed away at Hospice House on May 10, 2019 after a short battle with cancer. He was born December 19, 1955 in St. Joseph, Missouri and was adopted when he was six years old by Allen and Beverly Odell.... View Obituary & Service Information

The family of John Allen Odell created this Life Tributes page to make it easy to share your memories.