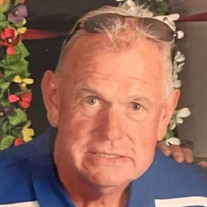 Our dad, John Calvin Kok, passed away on February 20, 2021. He was 82 years old. Dad was born on March 4, 1938 in Lynden, Washington to Ed & Grace Kok. He was one of eight siblings, and he grew up on the family farm on the Jackman Road in Lynden. The farmhouse had only one bathroom, and he shared a bedroom with his 5 brothers! He attended Ebenezer Christian School until the 8th grade, at which time he quit school in order to help on the farm when his dad began having health issues. Dad joined the Army Reserves in his late teens, and after his service he returned to Lynden and earned his GED. Dad did not love farm life, but he loved numbers. He attended Bellingham Community College and was trained in accounting. His first job out of college was working in accounting at Stemeyer’s; he obtained valuable experience there which led to his job at Georgia Pacific. He eventually opened his own accounting business and worked as an office mate with Curtis Dalrymple for 45 years. Most of his friends and family members called him Squirt, a nick name he earned during his school years because he was smaller than many of the other kids. The name stuck, and his friends from school used this nickname for his entire life. Dad loved sports, and he passed on this love to us kids. We remember watching Monday Night Football together, catching pop-up flies he would hit to us in the backyard, watching UW football, and attending many sporting events. He was a Little League coach for several years. He played church league fast pitch softball as a pitcher for many years with his brother Matt, who was the catcher. We remember attending some of his games at the fairgrounds in Lynden – these are great memories for us! Dad married our mom, Peggy DeGroot, on October 24, 1958, and they raised five kids in Lynden. They were married for 25 years. After their divorce, Dad moved to Bellingham. He enjoyed living in Bellingham and loved his house near Civic Field, where he lived until his death. Dad was a member of Bethel Christian Reformed Church in Lynden. Every Sunday after church, our family would get together for coffee with our grandma Grace, and Dad’s brothers, sisters, and their families. Because of this, we are extremely close to aunts, uncles, and cousins. We are so thankful for this time with our relatives! Dad’s passion was golf, and he was a long-time member of the Bellingham Golf and Country Club. We remember a special putter that he used for many years. He loved hanging out with his friends, and he had many of them. He enjoyed trips to Las Vegas, Arizona, and enjoyed attending and playing in golf tournaments. In 1995, Dad married Charmaine Stark, and they were married for 12 years. Dad was preceded in death by his parents, Ed and Grace, his brothers Hip, Lou, Marv, and Ed, his sisters-in-law Laurie, Fran and Lena, his brother-in-law Maurice, his son Brian, and his granddaughter Heather. He is survived by his sisters Betty and Marsha, his brother Matt, and his sisters-in-law Toots, Shirley, and Sheila, along with his sons Brent (Mary), and Brad (Sonja), his daughters Brenda (Larry), and Barbie (Alex), and his grandkids Benjamin, Emily, Kevin, Cassie, Courtney, Tyler, Kayla, Gracie, Nico, and Hannah, 5 great grandkids, and many nephews and nieces. Our brother Brad and family plan on visiting this year from Berlin, and we will hold a memorial service at that time. Memorials may be sent to Meals on Wheels, 315 Halleck Street, Bellingham, WA 98225. You are missed Dad! We love you and will see you again! You may share your memories of John at www.westfordfuneralhome.com.

Our dad, John Calvin Kok, passed away on February 20, 2021. He was 82 years old. Dad was born on March 4, 1938 in Lynden, Washington to Ed & Grace Kok. He was one of eight siblings, and he grew up on the family farm on the Jackman Road in... View Obituary & Service Information

The family of John Calvin Kok created this Life Tributes page to make it easy to share your memories.