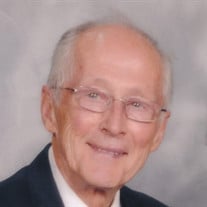 John William Havland, age 82, passed away at United General Hospital in Sedro-Woolley on October 26, 2019. He was born to William and Helen Havland on June 5, 1937, in Seattle, WA. He earned his BS in Business and later earned his MBA, from Arizona State University. While in Arizona he met Jeannie Milton Pierce and less than six months after meeting, they were married on August 6, 1971. John became an instant father to two year old Jamie Pierce. Two years later, Eric Christopher Havland was born. William Alex Havland was born in 1978. John worked at Western Washington University from 1973-2003. He held several positions before retiring as Assistant to the President and Provost of the university. John served Christ the King Community Church as an elder, a 12 step leader, and the founder of “The Eternity Brothers.” He loved fishing, sailing, hunting and boating. He taught his sons how to fix practically anything. He was fond of buying items and turning sows’ ears into silk purses. He was a gifted artist who created beautiful stained glass windows, carved wood and slate, painted in oils and watercolors. John’s trust and reliance on his Lord and Savior brought him through many struggles in his later years. He studied the Bible every day, and always prayed fervently for his family and friends. He is survived by his wife, Jeannie Havland, sons James Pierce, Eric Havland (wife Bree), and Bill Havland, grandchildren Gunnar, Grace, Connor and Ryker, sister Joan Havland Stewart (husband Angus), and numerous loving nieces, nephews, and friends. A Remembrance Service will be held at Christ the King Bellingham, 4173 Meridian St. in Bellingham, at 2 PM on Tuesday, November 5th. Reception following at the church. Pastor Grant Fishbook will be officiating. Memorials may be made to CTK Bellingham or Support Officer Community Care.

John William Havland, age 82, passed away at United General Hospital in Sedro-Woolley on October 26, 2019. He was born to William and Helen Havland on June 5, 1937, in Seattle, WA. He earned his BS in Business and later earned his MBA, from... View Obituary & Service Information

The family of John W. Havland created this Life Tributes page to make it easy to share your memories.