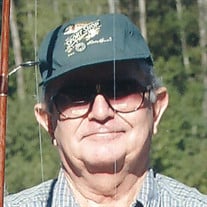 Our beloved John Demetriff went home to be with the Lord on March 9th, 2019. John passed away peacefully in his home surrounded by family in Bellingham, Washington. John was a powerful example of strength and resilience in our lives and his sudden passing has been a shock to his family. As we mourn his passing we are overwhelmed with gratitude that we were able to share our lives with him for as long as we did. John was born on November 27th, 1938 in Los Angeles, California to William and Anna Demetriff. John was preceded in death by his brothers George and Bill, his father William, and his mother Anna. John married Dorothy Dootoff in Los Angeles on February 28th, 1960. John's love for his wife of 59 years was abundant and unconditional and their marriage continues to be a powerful example of true love to all of us. John had four children with Dorothy: Julianne, Stephanie, John II, and Cyndi. He deeply cherished his children and his grandchildren and he loved his children and grandchildren's spouses as if they were his own. In 1996, John and Dorothy retired to Bellingham, Washington to be closer to their grandchildren. When John was 18 years old, he graduated from Garfield High School in Los Angeles, California, where he was captain of the swim team. He continued to enjoy athletics into his parenthood by coaching many of his children’s sports teams. John owned and operated his own construction business called DEMCO Construction in Los Angeles for many years. He enjoyed boating near Catalina Island on the “BIGAJO”, which was named after the three brothers in his family, John, Bill and George. Anyone that knew John knew that he had a passionate love for the art of fishing and his children and grandchildren all learned how to fish from him. John single handedly built a legendary cabin in Big Bear, California, where he would take his family to share his love for the outdoors. John is survived by his loving wife of 59 years, Dorothy; his four children and their spouses, Julianne & Morrie Kosareff, Stephanie Alexander, John Jr. & Christina Demetriff, and Cyndi & Steve Wilson; and his grandchildren, T.J. Alexander, Andrew Wilson, Samantha & Anthony Sackman and John Demetriff III, along with many other loving relatives and friends. Honor, loyalty, and a great sense of humor were among many of the values that John taught us and his rich character will never fade from our memories. Although his presence in our lives is deeply missed, the legacy that he built throughout his life continues to live on in us and in this way he will never truly leave us. A private service for John’s family will be held on Saturday, March 16th, 2019. You may share memories with the family at www.westfordfuneralhome.com.

Our beloved John Demetriff went home to be with the Lord on March 9th, 2019. John passed away peacefully in his home surrounded by family in Bellingham, Washington. John was a powerful example of strength and resilience in our lives and his... View Obituary & Service Information

The family of John J. Demetriff created this Life Tributes page to make it easy to share your memories.

Our beloved John Demetriff went home to be with the Lord on March...