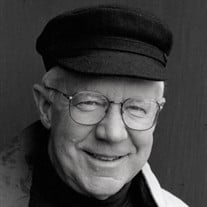 Don Anderson was born Friday the 13th of September, 1940, in Sedalia, MO to Genevieve and Kenneth Anderson. Don attended school in Sedalia through junior high then moved with his family to Jackson, MS, where he graduated from Provine HS and Mississippi State University. After a University piano contest, the judging professor roared out, "Let me see your hands! You have the hands of a true musician or a surgeon." Don actually chose both. Don attended medical school at the University of Mississippi School of Medicine where during his senior year, he married the joy of his life, Alice Racer, of Lynchburg, VA. Following his medical internship, Don joined the Navy, serving at Patuxent River, NAS Sq.8 and Corpus Christi NAS Sq.28, as Flight Surgeon for VP-8. Many adventures ensued. Don had developed an interest in ophthalmology during this time, soon taking his residency at The Ohio State University where he was third year Chief Resident. In 1973, Don and his young family moved to Bellingham, joining Doctors Robert Kaiser and John Hodge at NW Eye Clinic, later to be joined by Dr. Fred Kaiser. Don was a kind, compassionate physician frequently seen engaging children with a puppet show and an ear wiggle to put them at ease. Don had many passions throughout his life. At age nine, he wanted to buy a piano but Mom said - No, we will get you one. On his first date with Alice where they met at The Gulf Coast Research Lab, she commented on his ukulele-playing and he replied, "Music is my life''. She was snowed! Beyond the ukulele and trombone, tickling the ivories brought him, and those around him, the most joy. Don volunteered his talents at the Maple Alley Inn and dedicated many years to playing the National Anthem for his beloved Bellingham Rotary Club, now honored there as a Lifetime Member. He loved playing every day at home as well, even teaching his dog to dance to Scott Joplin! In addition to his love of music, Don kept sharp by developing presentations for Hobby Club, volunteering at Bellingham Technical College teaching ESL, finishing the Sunday NY Times Crosswords, and consistently answering Final Jeopardy for Alex Trebek. Don was a dedicated member of St. Paul's Episcopal Church for 48 years where he was a lay reader and chalice bearer. He valued the friendships built and nourished within the church community and has missed church so much since Covid restrictions. Other talents of mention: joke telling (the long, involved ones), slicing a banana with the skin on, whipping up a batch of cookies for his daughter at college, having the loudest whistle on the block calling his kids to dinner, building winning Pinewood Derby cars with his son, and listening and loving unconditionally. Don has had many friends through his 80 years, quietly admiring and cherishing each one. Don was preceded in death by his brother, Vincent "Pike" Anderson (Marcia Anderson) and his parents. He is survived by Alice, his wife of 57 years, daughter Gretchen Cilley (Brad), son Dave Anderson (Stephanie), his grandchildren, Noah and Emma Anderson, and Evan and Joe Cilley, and special cousin Jim Anderson. A memorial service will be held for the family and a celebration of life service will occur at a later date. You may share memories at www.westfordfuneralhome.com.

Don Anderson was born Friday the 13th of September, 1940, in Sedalia, MO to Genevieve and Kenneth Anderson. Don attended school in Sedalia through junior high then moved with his family to Jackson, MS, where he graduated from Provine HS and... View Obituary & Service Information

The family of John Donald (Don) Anderson created this Life Tributes page to make it easy to share your memories.