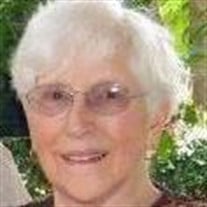 Joanne MacKay (née Joanne Coby Williams), a longtime Bellingham resident, passed away peacefully on Friday, August 21st. She was 93 years old. She had been living with her son David and his wife Aileen near Lake Whatcom for the past year. Joanne was intelligent, spirited, well-read, and practical, and will be dearly missed by her family and many friends in the Bellingham area. She was a dedicated teacher and business owner, loving wife and mother, and caring grandmother who never missed a birthday. Joanne was happily married for sixty-three years to the late William “Bill” MacKay, who passed away seven years ago. Bill taught Psychology and directed the Counseling Center at Western Washington University for many years. Joanne was later briefly married to Bellingham resident Stan Enebo. Joanne was preceded in death by her parents, Helen and Paul Williams, brother Paul, and sister Sharlot. Joanne is survived by her three children and their families: Barbara and Yogendra Gupta of Pullman, Douglas and Mary MacKay of Edmonds, and David and Aileen MacKay of Bellingham; six grandchildren, Anjuli, Sonia, Glen, Kayla, Michael, and Jonathan; and the spouses of the her eldest grandchildren, David, Christopher, and Hillary. She is also remembered by the Enebo family who continued to welcome Joanne to family gatherings even after Stan’s passing in 2012. Joanne was born in Lakewood, Ohio. She graduated from Kirkwood High School in St. Louis, Missouri. While in high school, at a Girl Scout Boy Scout dance, Joanne met Bill MacKay, who would be her partner for over 70 years. Joanne graduated from Duke University in 1943 with a major in Economics and a minor in Psychology. Immediately after graduating, she joined the Curtis Wright Aeronautical Engineering Cadettes Program. With her group of Cadettes, she studied engineering at the University of Texas at Austin and then worked as a draftsman in the Electrical Department of Curtis-Wright Aircraft Company in St. Louis, Missouri, where she designed windows for the C-46 aircraft until the end of World War II. Joanne and Bill were married by her grandfather in 1945 at her parents’ home in Toledo, Ohio. They began their life together in Pacific Grove, California, where Bill was stationed as a Marine. His ship was the first not to sail into the Pacific Theater in 1945. After the war, they moved to the San Francisco Bay Area where he pursued graduate degrees at U.C. Berkeley. Joanne studied at San Francisco State to become credentialed to teach at and direct nursery schools. She taught at Frederick Burke Nursery School, the demonstration nursery school at SF State, and at a cooperative preschool in Richmond, California. There also she led a Blue Bird Group and a Cub Scout Den. Joanne and Bill moved to Bellingham with their children in 1961, where she was active in the American Association of University Women and served as Program Director and Cookie Chair for Bellingham Girl Scouts. Joanne worked closely with Hallie Vernon (who had trained directly with Maria Montessori) and alongside the Baptist Church to establish the Bellingham Day Care Center (now Bellingham Care and Learning Center). Constant efforts on her part with the United Way and the introduction of a sliding fee schedule kept the Center open and able to serve parents of all children. She served as Treasurer of the Board and eventually as Director of the Center from 1968 - 1975. Following her career in education, Joanne owned and operated Tony’s Coffee Shop in Fairhaven from 1977 to 1987, traveling to San Francisco to meet coffee brokers and roasting her own beans. She expanded the shop to introduce a café and sell imported cheese. Always enjoying a new challenge, Joanne continued the genealogical work begun by her mother-in-law and her parents, eventually documenting many lines of the family tree to as many as thirteen generations. She also traced the family trees of several friends. She traveled to Boston a number of times to work with digital records of early ancestors at the New England Genealogical Society Library. In their retirement, Joanne and Bill loved to travel, making multiple trips to Asia and Europe, and never missed an opportunity to do genealogical research at a county library or churchyard along the way. Joanne and Bill joined The Parkway Chateau community in 2002, where they enjoyed spending time with new and old friends. Following Bill’s death in 2008 and Stan’s death in 2012, the Chateau community provided her tremendous support. Joanne especially enjoyed being an integral member of the Chateau Book Club. Her grandchildren are proud that she taught computer classes (including Gmail) to fellow residents, and opened a Facebook account when she was 89. A private memorial service will be scheduled at a later date. In lieu of flowers, please consider a donation to Duke University, Whatcom Hospice or Whatcom Humane Society.

Joanne MacKay (née Joanne Coby Williams), a longtime Bellingham resident, passed away peacefully on Friday, August 21st. She was 93 years old. She had been living with her son David and his wife Aileen near Lake Whatcom for the past year. Joanne... View Obituary & Service Information

The family of Joanne W. MacKay created this Life Tributes page to make it easy to share your memories.