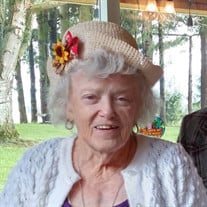 Joanne Peacock Gardner of Bellingham passed away Tuesday, November 15, 2016 at the Lynden Christian Health Care Center. She was born on October 2, 1923 in Gardiner, Maine, to George and Helen Peacock in a family of 7 children. She married Carl Gardner on June 21, 1941 in Gardiner, Maine. Joanne is survived by her daughter Jeanie (Ken) Schneider of Everson, son-in-law Phil Royal, grandchildren Angela Jacoby, Jacqueline (Marty) Matheson, Ken Schneider and Derek Downing, great grandchildren Eli, Tianna, Mick, Gabe, Chelan, Salli Jo, Roslyn and Denali and great-great grandchildren Hadley and Ridge. She was preceded in death by her husband of 62 years, Carl, in 2004 and daughter Donna in 2015. Joanne worked at the State House in Augusta, Maine and later worked at McClellan Air Force Base (Sacramento, CA) during the Korean War. She moved to Bellingham in 1957 and worked at St. Joseph Hospital in accounting and then moved to St. Luke's Hospital as Business Manager. In 1973, the Physicians of Northwest Medical Center employed her as Administrator. She was responsible for starting the Laurendeau Foundation for Cancer Care. She received the Barney Goltz award for outstanding work for the Laurendeau Foundation. She was a member of Laurel Baptist Church. She was a member of many historical societies, such as Magna Carta, Plymouth Colony, DAR, and was also a member of the Moose and VFW as well as a member of Maple Leaf Chapter of Eastern Star and a mother advisor of Rainbow Girls, receiving their "Grand Cross of Color". She was a member of the Board of Directors of Whatcom Community College and Bellingham Technical College. Joanne and Carl had many outdoor adventures and made long-lasting friends while traveling throughout the country. Joanne loved knitting, dolls, antiques & clowns. She operated an antique shop for several years. She busied herself with many hobbies, loved music, oil painting and many other crafts. She loved the ocean beaches and all of God's wonder! Above all, Joanne loved people. She helped many start their work careers and along the way she became their good friend. Her friends thought of her as a sweet, fun-loving lady, who shared much laughter and good times. She kept her sense of humor to the very end. Services will be held on Monday, 11/21/16- Visitation at Westford Funeral Home from 10:30 am-12:00 pm, graveside service at 1:00 p.m. at Ten Mile Cemetery followed by a reception at Laurel Baptist Church, 162. W. Laurel Rd., Bellingham, WA 98226. Memorials may be made to the Laurendeau Cancer Care Fund and may be mailed to the Chuckanut Health Foundation, PO Box 5641, Bellingham, WA 98227. You may share memories with the family at www.westfordfuneralhome.com.

Joanne Peacock Gardner of Bellingham passed away Tuesday, November 15, 2016 at the Lynden Christian Health Care Center. She was born on October 2, 1923 in Gardiner, Maine, to George and Helen Peacock in a family of 7 children. She married Carl... View Obituary & Service Information

The family of Joanne Peacock Gardner created this Life Tributes page to make it easy to share your memories.