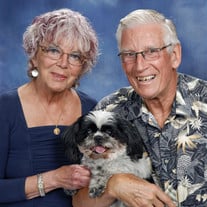 Joan Emma Pape was born in the Bronx borough of New York to Carmelina Maria Daraio and Gaetano Ambrosia Ferlauto on February 8, 1939. Her father, a marble and stone artisan, later moved the family to Norfolk, Virginia, where she graduated from Norfolk Catholic High in 1956. Joan’s first job was with the Norfolk newspaper which she left to work at Oceana Naval Air Station. Always up for an adventure, she then moved across the country to Bremerton, Washington for another position with the Navy. In 1964, she returned to Norfolk to give birth to her only child, Patrick. In 1973, Joan married Naval officer Brian Pape in Norfolk, Virginia. She was very proud of Brian and loved meeting people from around the world via his long tenure in the Naval Reserve. Joan and her family moved to Chicago and then California before settling in the Pacific Northwest. There, she pursued her dream of helping others by studying social work and going on to work in community services with King County and Providence Hospital. After moving to Bellingham, Joan co-founded Hope House, a non-denominational charity serving the poor and homeless. Nominated for the annual Hunthausen Humanitarian Award in 2001, Joan served on the boards of many non-profits including The Martin Center for Disadvantaged Teens, the Advisory Board of Governors, and Catholic Community Services. A devout Catholic all her life, Joan was always very active in her church community. She proudly served her Church of the Assumption Catholic parish as Eucharistic minister and Eucharistic Minister to the Homebound. Joan generously supported the Whatcom Symphony Orchestra, Mt. Baker Theater, Bel Porto Lodge Sons of Italy, and the Bellingham Golf & Country Club and her vivacious personality made her many friends. A proud Sicilian, she’ll always be remembered for her love of cooking, parties, jazz, opera, classical music, ballet, and Broadway shows. Joan is survived by her husband, Brian, son Patrick, stepson Scott, step-daughter Debra, and her beloved grandchildren: Gillian, Stella, Matthew, Mark, Brittany, Breana, Jenna, and Scott Jr.. Mass of Christian burial will be held at 10:30am on Thursday, May 4th at Church of the Assumption. A reception will follow at the Church. Memorials may be made to Hope House at Church of the Assumption, 2116 Cornwall Avenue, Bellingham, WA 98225. Share your memories at www.westfordfuneralhome.com.

Joan Emma Pape was born in the Bronx borough of New York to Carmelina Maria Daraio and Gaetano Ambrosia Ferlauto on February 8, 1939. Her father, a marble and stone artisan, later moved the family to Norfolk, Virginia, where she graduated... View Obituary & Service Information

The family of Joan E. Pape created this Life Tributes page to make it easy to share your memories.

Joan Emma Pape was born in the Bronx borough of New York to Carmelina...