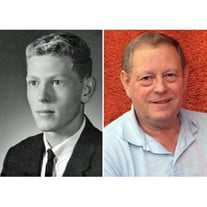 Surrounded by loved ones, Jerry McAlpine passed away peacefully at the Whatcom Hospice House on Wed, Sept 7, 2016. After battling pancreatic cancer, Jerry's life ended too soon at the age of 68. Jerry spent his first five years in Garberville, CA before moving back with his family to their "roots" in Whatcom County. Other than a few years recently spent in Union, WA, Jerry spent the rest of his life in Whatcom County. He graduated from Ferndale High School in 1965 and attended Skagit Valley College. He worked for a number of years at Georgia-Pacific in B'ham until he successfully challenged the UW's accounting degree program. Jerry then obtained his CPA license and practiced public accounting for many years. He also owned and operated JC's Restaurant in Ferndale and Allyn Liquor in Allyn, WA. Jerry was a gifted athlete, participating in many sports. A star athlete at Ferndale HS in basketball and baseball, he also pitched for Skagit Valley College, where he was recruited by the major leagues, until a knee injury shortened his baseball career. Jerry continued with his love of sports by playing city-league basketball with his brothers, hockey, golf, bowling, fishing, and many years of softball. A highlight of Jerry's last year was the trip he took with all five of his children to MLB's Spring Training in AZ. Jerry loved to read, was an "ace" at cribbage, and formed bonds with many people over his lifetime. He will be greatly missed by his surviving wife, Brenda Glasmann-McAlpine; sister, Jean (Dave) Nelson; brother, Del (Joey) McAlpine; sister-in-law, Ginny McAlpine; children: Monty (Nicole) McAlpine and Marla McAlpine, whom he shared with former spouse, Patsy (Andriff) Hawley, and J.D. (Alisa) McAlpine, Jeff (Tara) McAlpine, and Dani (Mark) Woodley, whom he shared with former spouse Tome (O'Neil) McAlpine; along with nine grandchildren, (with another on the way), and many nieces and nephews. Predeceasing Jerry: parents, Jack & Edith (Bowen) McAlpine; sister, Joan (Bill) Korhummel; and brother, John McAlpine. Please join us in celebrating Jerry’s life at 2:00 pm on Tues, Sept 27, 2016 at Broadway Hall, 1300 Broadway, Bellingham, WA. A reception will follow. Memorials may be made to Whatcom Hospice House.

Surrounded by loved ones, Jerry McAlpine passed away peacefully at the Whatcom Hospice House on Wed, Sept 7, 2016. After battling pancreatic cancer, Jerry's life ended too soon at the age of 68. Jerry spent his first five years in Garberville,... View Obituary & Service Information

The family of Jerrold Douglas McAlpine created this Life Tributes page to make it easy to share your memories.

Surrounded by loved ones, Jerry McAlpine passed away peacefully...