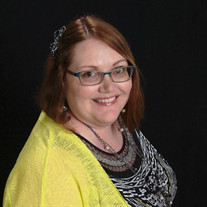 Jeanne Robinson, of Lynnwood, Washington, passed away on Saturday, March 12, 2016 after a tough battle with cancer. She is survived by her parents, Donald and Jacalyn Robinson of Thornton, Colorado. Jeanne was an only child, however, Don and Jackie were not, so there are many surviving Aunts, Uncles, and Cousins. She is also survived by her fur-babies: Chloe a 7-year-old tortie, and Charlie a big 5-year-old buff-colored tabby, both adopted through Purrfect Pals. Jeanne was born in Galesburg, Illinois on February 10, 1974. She spent her formative years in Hayden, Colorado. It was here that she began to play the clarinet. Her family attended the Hayden Congregational Church. The church’s Christmas festivities were always a real joy for Jeanne: decorating the church, caroling in a horse-drawn sled, and Christmas Eve candlelight services. In addition to band, she played volleyball, basketball, and ran track at school, and did t-ball, softball, tennis, and dance through the local recreation program. Her family moved to Montrose, Colorado the summer before 8th grade. While she was very unhappy about the move, she eventually flourished in her new hometown. There were more music opportunities through school, private clarinet lessons with Erma, and playing with the Valley Symphony Orchestra. She participated in numerous regional honor bands and was selected to the Colorado State Honor Band in both her Junior and Senior years. Jeanne and her parents attended the Montrose United Methodist Church where she did many youth group activities. Jeanne was active in Rainbow with Montrose Assembly #33 where she served two terms as Worthy Advisor, was a former Grand Patriotism, and earned the Grand Cross of Color and the Pot of Gold before her majority. She also played tennis for Montrose High School and acted in both the school drama club and Magic Circle Players, the community theater group. Jeanne graduated from Montrose High School in 1992. She went to college at Colorado State University as a Music major and participated in the Honors program. After deciding that the life of a starving musician was not for her, she switched her focus to Mathematics. In spite of changing her major, she still graduated in 4 years with a Bachelor of Science degree in Mathematics and a Music minor. She was recruited out of college by Safeco Insurance Company and came to the Pacific Northwest in 1996. She started her IT career in Quality Assurance before moving up to Business Analysis and on to IT process management roles (ITIL). She didn’t survive the Liberty Mutual transition, but landed on her feet at T-Mobile as a Change Manager in 2009. It was at T-Mobile that she had the opportunity to earn her ITIL Expert designation. Jeanne had a lifelong love of cats and reading. Other hobbies she enjoyed were: cross-stitch needlework, quilting, card-making, scrapbooking, tennis, ping-pong, movies, and hanging out with friends. She also did some travelling and completed her own personal Grand Slam, attending each of the four major tennis tournaments. Jeanne was diagnosed with Melanoma in 2013. Despite the care from her doctors, her body fought the cancer drugs more than it did the cancer. Ultimately the metastatic melanoma spread to her brain and other major organs, causing her death. A memorial service will be held at the Rosehill Community Center, Mukilteo, Washington at 4 PM on Monday, March 28, 2016. Inurnment will occur on a later date in Colorado. Memorials may be made to Purrfect Pals (purrfectpals.org) or the Melanoma Research Foundation (melanoma.org).

Jeanne Robinson, of Lynnwood, Washington, passed away on Saturday, March 12, 2016 after a tough battle with cancer. She is survived by her parents, Donald and Jacalyn Robinson of Thornton, Colorado. Jeanne was an only child, however, Don and... View Obituary & Service Information

The family of Jeannette Lynn "Jeanne" Robinson created this Life Tributes page to make it easy to share your memories.

Jeanne Robinson, of Lynnwood, Washington, passed away on Saturday,...