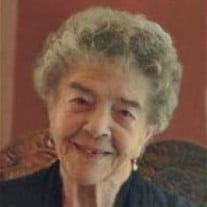 Jean Sornberger, age 96, passed away peacefully on Wednesday, December 9, 2015. She was born July 6, 1919 in Gull Lake, Saskatchewan to Charles and Iva (Pearce) Willett. Jean graduated from Whatcom High School and attended WWU. She married Glen Sornberger on August 22, 1943. In 1949 Glen and Jean founded Sornberger’s, a local, family drive-in. Jean had a strong faith in the Lord and was a longtime member of First Advent Christian (later Fountain Community Church). Jean’s family was most important to her. She was a loving grandmother who was actively involved in the lives of her grandchildren and great-grandchildren. She loved watching sports, especially when her grandkids were playing. Jean enjoyed hosting pinochle parties, square dancing, bowling and traveling. She will be remembered for her wonderful (and sometimes flirtatious) sense of humor. She was preceded in death by her husband Glen in 1976, sons-in-law Ray Satterfeal and Terry Williams, and siblings Charles, Gordon, Della, Betty, Wayne and Tom. She is survived by her three daughters, Glenda Satterfeal of Delaware, MaryLynn (Darrell) Honrud of Bellingham and Annie Williams of Marysville, grandchildren, Bobbi Jean, Rob, Melissa, Jami, Jennifer, Vonda, Marlin, Erica and Joey, 27 great-grandchildren and many loving relatives and friends. A Service of Remembrance will be held at Westford Funeral Home at 12 noon on Thursday, December 17th. Reception following. Committal will follow at Hopewell Cemetery in Deming. Memorial donations may be made to Providence Hospice.

The family of Jean Sornberger created this Life Tributes page to make it easy to share your memories.