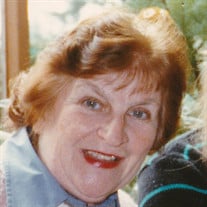 Janet Colton Chandler Shawn, 89, of Lynden, WA, was finally cleared for take-off. Her free spirit soared peacefully into the wild blue heavens on Saturday, April 6, following a brief illness. She will always be remembered by family and friends as a feisty, fascinating, independent woman who charmed everyone she met with her vivid anecdotes of a colorful life, and dedication to the causes she was passionate about. Janet was born on August 28, 1929 to Leota Barton Chandler and Dorsey Freeman “D.F.” Chandler in Montevideo, MN, joined in 1934 by baby sister Sally Ball Chandler (Darsney). Janet has regaled us with many happy tales of childhood—where her lifelong love of aviation and theatre started—including flights in barnstorming biplanes, running a “pretend airline” and putting on lots of plays with her neighborhood friends. After “DF” passed in 1940, the family returned to Leota’s ancestral roots in Springfield, MA, where Janet would spend the rest of her formative years. As a teenager she rode her bike to a local airfield to trade chores for flying lessons, earning her pilot’s license at age 16—years before learning to drive. She was a member of the Civil Air Patrol during WWII, but was too young to join the WASPs. When the war ended, her mother advised her to “learn to fly a typewriter” instead. Janet graduated from Classical High School and Park Edge Secretarial School in Springfield, MA, then joined Standard Electric Time Corporation as an executive secretary. It was there that she caught the eye of salesman George B. Shawn Jr. while wearing a tangerine-colored dress. His joke, “For the same amount of money you could have bought a red dress,” (and the fact that he loved airplanes, too) led to a marriage that lasted 51 years, beginning December 4, 1950. George and Janet lived for many years in East Longmeadow, MA, where they raised two daughters and were active in the service club JayCees and many civic projects. One labor of love was running the local Miss E. Longmeadow pageants, which Janet staged with award-winning panache. Her “show-biz savvy” helped launch the Broadway career of actor Jim Wilkins, part of Janet’s lifelong thrill spending time in New York. George’s career led to several moves and the family lived briefly in Illinois, Maryland and New Hampshire, grateful for experiences of lots of new and “old” historic sites. The last move to Lynden in 1990 was primarily for the experience of being grandparents, but Janet found a “2nd home” with the Claire vg Thomas Theater as a publicist, ticket chair, and all-around volunteer for over 140 productions, cherishing many deep, lasting friendships made in the community. Janet was preceded in death by her parents, husband, and sister; with special mention of her best friend for 80 years, Carolyn Hale of Springfield, MA. She is survived by daughters Sara Shawn Johnston of Lynden, Julia Shawn (Terry) Clark of Candler NC; grandchildren Kati Rose (Sean) Wieder, Justin (Britni) Holt, Kelsey Johnston; great-granddaughter Amelia Wieder; brother-in law Raymond Darsney and nephew Scott Darsney; sister-in-law Ruth Shawn and many beloved nephews and nieces. In lieu of flowers, the family asks that any memorials be made to the scholarship fund of the non-profit organization Women in Aviation International. https://www.wai.org/. Janet had so many exploits and interests it’s impossible to list them all, but her grandchildren summed it up: She was as fiery and fierce as the autumn leaves she loved so much. She lived a life so big it seemed legendary. She flew planes, and then a typewriter. She drove convertibles and local talent to the lights of Broadway and never did anything quietly that could be done with a big musical number and a spotlight instead. She taught us the magic of theatre, the art of the yard sale, the strength and beauty of ice skating. She was a news junkie, a fire engine chaser, an avid scrapbooker, and a strong opponent of any technology after VCRs and cassette tapes. She taught us to be thrifty, work hard, and to be proud of our family history. In short, she was unforgettable, unsinkable, and unstoppable. May she rest in peace. A memorial service will be held at the Claire vg Thomas Theatre, 655 Front St. in Lynden on Monday, April 15th at 1 PM. Final resting place will be in the Springfield, MA area following a private family gathering. Share memories with the family at www.westfordfuneralhome.com.

Janet Colton Chandler Shawn, 89, of Lynden, WA, was finally cleared for take-off. Her free spirit soared peacefully into the wild blue heavens on Saturday, April 6, following a brief illness. She will always be remembered by family and friends... View Obituary & Service Information

The family of Janet Colton Chandler Shawn created this Life Tributes page to make it easy to share your memories.