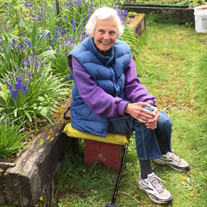 Janet Dickinson Craven, age 92, passed away peacefully in Bellingham on Thursday, December 3, 2020. She was born April 11, 1928 in Middletown, Connecticut to Kenneth E. Hall and Dorothy H. Hall, and was adopted by stepfather Charles A. Dickinson nine years later. Jan moved to Bellevue, Washington with her parents and two younger brothers when she was in high school. She was in her teens when she met Truxtun Craven, one year older, who had also recently moved west with his family. They married in 1948 and started their family. After moving around the country for several years with Trux’s job at Boeing, Jan and Trux fell in love with Vashon Island and settled there with their three oldest children in 1959; their youngest was born there. Jan spent her time and energy raising her children and cultivating her gardens in Glen Acres. For many years she taught square dancing in the Seattle area and on the island. She liked to shock people by remarking that she was once known as Seattle’s best call girl, a title she earned as an excellent, and rare, female square dance caller. Trux loyally carried and set up the sound system at various halls so Jan could direct the dances. Islanders of a certain age will remember her teaching square dancing at their grade school. Once their children were launched, Jan and Trux enjoyed traveling together, exploring Mexico and the American southwest in their motorhome and barefoot cruising in the Caribbean. They left on their travels at the end of October each year and returned to the island in the spring when the gardens were beginning to wake up. Jan was always happiest outdoors, especially in the sunshine. She loved people, and was genuinely interested in their stories. She loved the earth and was a recycler long before it was popular. She had a lovely smile and a loud, happy laugh. Trux died in 2015 and Jan left her beloved island two years later when she realized she could no longer keep up with her gardens, moving to Bellingham where two of her daughters live. She was preceded in death by her husband Truxtun Craven and her brother Donald Dickinson. She is survived by her four children, Christine Craven (Rik Dalvit), Catherine Mix (Tom), Thomas Craven and Dorothy McCoy; grandchildren Kristian, Kyle (Charlyn), Colin (Drue), Emily, Greg (Katie), Graham, Truxtun, Hailey, Kelsey and Melanie; great-grandchildren Keira, Evlyne, Aleria, Alistair and Penelope, brother Richard Dickinson (Rosalind), half-brother Rodney Hall, and many loving relatives and friends. A family service was held. Final resting place will be Vashon Island Cemetery. A virtual, live streaming service will be held on Thursday, December 17th at 11:00am. Final resting place will be Vashon Island Cemetery. You may share memories with the family at www.westfordfuneralhome.com.

Janet Dickinson Craven, age 92, passed away peacefully in Bellingham on Thursday, December 3, 2020. She was born April 11, 1928 in Middletown, Connecticut to Kenneth E. Hall and Dorothy H. Hall, and was adopted by stepfather Charles A. Dickinson... View Obituary & Service Information

The family of Janet Dickinson Craven created this Life Tributes page to make it easy to share your memories.